You must have seen automatic door openers in shopping malls and other commercial buildings. They open the door when someone comes near the entrance and close it after sometime. A number of technologies are available to make such kinds of systems like PIR sensors, Radar sensors,  Laser sensors, Infrared sensors, etc. In this arduino based project, we have tried to replicate the same system by using a PIR sensor. 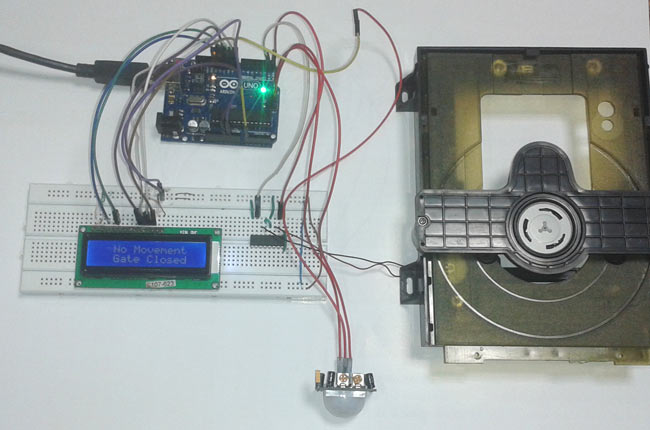 It uses a motion-detecting sensor (PIR sensor) to open or close the door which detects the infrared energy omitted from human’s body. When someone comes in front of the door, the infrared energy detected by the sensor changes and it triggers the sensor to open the door whenever someone approaches the door. The signal is further sent to arduino uno that controls the door.

Here we should note that every object emits some amount of infrared when heated. Human also emits infrared because of body heat. PIR sensors can detect small amount of variation in infrared. Whenever an object passes through the sensor range, it produces infrared because of the friction between air and object, and get caught by PIR.


The main component of PIR sensor is Pyroelectric sensor shown in figure (rectangular crystal behind the plastic cap). Along with BISS0001 (“Micro Power PIR Motion Detector IC”), some resistors, capacitors and other components used to build PIR sensor. BISS0001 IC take the input from sensor and does processing to make the output pin HIGH or LOW accordingly.

Pyroelectric sensor divide in two halves, when there is no motion, both halves remain in same state, means both senses the same level of infrared. As soon as somebody enters in first half, the infrared level of one half becomes greater than other, and this causes PIRs to react and makes the output pin high.

Pyroelectric sensor is covered by a plastic cap, which has array of many Fresnel Lens inside. These lenses are curved in such a manner so that sensor can cover a wide range.

After designing this line follower robot using arduino uno, I have developed this computer controlled robot. It can be controlled via...