I’ve just completed my second Arduino project, a sound level detector which sets off an “alarm” when there’s the sound level is to high for too long.  I built it for use in a school that wants to provide visual feedback to students when they are being too loud.  The “alarm” is a string of flashing LEDs that’s controlled by an IR-remote, which I reverse engineered using the the arduino itself and the excellent IRremote library to figure out which codes activate the LED string. 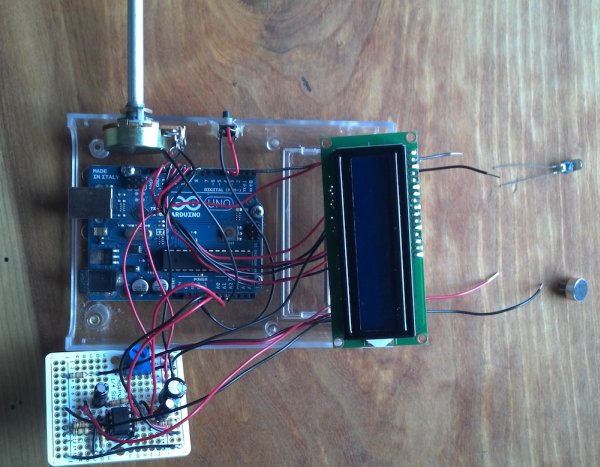 The IRremote library includes an example that dumps the codes and code types that remotes typically use.  So I just ran that example with my arduino hooked up to an IR detector from adafruit.  It was really quite easy to do.

It’s been a fun project because it’s quite flexible and configurable.  Here’s a short video of the finished product:

For anyone who wants to build one of these here’s a bread-board diagram that I made using the very cool Fritzing package:

The Adruino sketch that powers this is available on github.

Here are some details on the circuitry.  The sound detector is based on the ZX-Sound board. Here’s a nice post on the arduino.cc site that I used as my starting place for building the sound part of this board.  The video helpfully includes a parts list which I sourced from Allied electronics, all except for the mic. 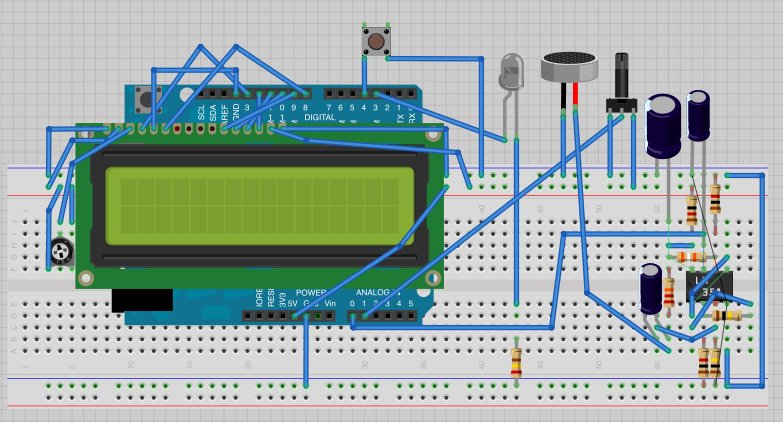 The LCD is the $10 16×2 from Adafruit (their tutorial on wiring it up was great), and I also used their electret microphone.  One note about the microphone is that it’s polarity matters.  If you get it in backwards, it’s much less sensitive.  I found this out purely by accident!  I also used their IR LED.

Here are some photos of assembling the project.