In this article, we are going to build an Arduino Real Time Clock using DS1307 RTC Module and 16×2 LCD module for display. First of all, let’s see how to interface RTC Module to Arduino. There are different kinds of RTC modules available in the market. We are using the most common RTC module comes named DS1307 IC, an LCD module and Arduino Uno for this tutorial. Interfacing an RTC module to Arduino is pretty simple. You only need to make 2 connections between the RTC module and Arduino. So let’s get to business! 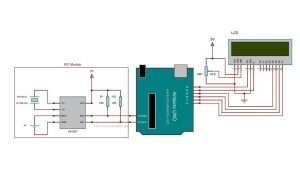 A Real Time Clock module is basically a time tracking device which gives the current time and date. RTC module that comes with DS3231 IC have the provision to set alarms.

Here we are using an RTC module with clock chip DS1307 based on I2C protocol (Two Wire Protocol). The module provides details such us second, minute, hour, day of week, day of month, month and year including correction for leap year. It can operate either in 12 Hour or in 24 Hour format. Current consumption of this module is nano ampere  range . Even a 3V battery can power it for 10 years maintaining an accurate clock and without any external power. DS1307 has a memory area of 64 bytes of which the first 8 bytes are reserved as RTC register area and the remaining 56 bytes are allotted as general purpose RAM. The details  about current date and time is stored in its register area as Binary Coded Decimals. The module communicates with the microcontroller using a serial communication protocol called I2C. The I2C bus physically consists of 2 active wires. The wires, called SDA and SCL, are both bi-directional. SDA is the Serial Data line, and SCL is the Serial CLock line. Every device connected to the bus has its own unique device address, no matter whether it is an MCU or RTC module. Each of these chips can act as a receiver or transmitter, depending on the functionality.

DS1307 will act as slave in the communication network and controller can only access the slave by initiating a start condition along with a device address. There after we need to send the register number in order to access the value inside. The interface to the Arduino is simple I2C with SDA and SCL pins are connected to the corresponding  I2C pins of arduino. At the software side we are using an  arduino library named “Wire” for I2C communication. This library allows you to communicate with I2C / TWI devices.

Make the connections as shown!  Now  lets get to the coding part.

We begin including LiquidCrystal library into the program. In the next line, we create a constructor of Liduidcrysal with name lcd and we pass the digital pin numbers as parameters. The actual format is like SoftwareSerial lcd (RS,EN,D4,D5,D6,D7); You will get more details about LCD interfacing on article “Interfacing LCD to Arduino”.

Here we are focusing mainly on RTC module interfacing. As mentioned earlier  a library named “Wire” is used here for I2C communication.  The  Wire.begin()  function will initiate the wire library. Since it is used for initializing the library, it need to be called only at the beginning.  Wire.beginTransmission() is the function used for sending device address. Then with Wire.write()we will send the number of the register whose value  we need to access.

The Wire.endTransmission() function will end the transmission. Wire.requestFrom() function is used by the master to request bytes from the module. Wire.read() will reads a byte that was transmitted from  slave device to Arduino after a call to requestFrom().

Monitor if the door or the valve gas is open... or if someone opened the cookie jar! Things used in...