A friend has approached me regarding his solar project. He wants to install a solar panel together with a battery and an inverter in order to have power at his allotment garden. He had looked at a hobbyist project where an arduino was used to build a MPPT (maximum point of power tracking) charge controller. I took a look at the design, liked a lot of what I saw and decided to build something similar. 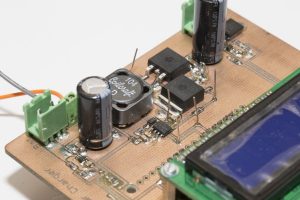 The basic idea behind an MPPT solar charger is simple. A solar panel has a certain voltage (in the region of 17 to 18 volts for a 12 volts pannel, somwhat dependent on temperature) at which it provides most power. So as long as the battery needs charging, you want to pull just as much current to reach this voltage. But once the battery is full you need to avoid overcharging the battery. So you want to maintain a maximum voltage for your battery (somewhere around 13.8 volts for a 12 volt lead acid battery) and no longer care about the pannel’s voltage.

So the charger needs to convert an input voltage of 17-18V to an output voltage of 12-14V as efficiently as possible. Obviously, a step-down (aka buck) switching converter is ideally suited for the job. However, a typical DC-DC converter is designed to maintain a stable voltage at it’s output, independent of it’s input voltage. As described above, our requirements here are different.

Switching converters are controlled by the duty cycle of a (typically) fixed-frequency PWM signal. So a microcontroller could be used to do the job. In most applications, this wouldn’t work that well because a microcontroller would be too slow to react to sudden changes in load or input voltage. But this is not much of a concern in our solar application: Sun intensity changes within seconds at best and the battery will absorb any sudden changes in load. So if we adjust our duty cycle a few times per second we’ll be more than fine. And that’s easy to do with a microcontroller.

Hello friends, I hope all are fine and having fun with your projects. Today, I am going to share a...