Skip to content
This is a project that I have been working on a few months now and I have completed its build very lately.  The main processor used in this project is an Arduino MEGA 2560 which is interfaced with a real time clock called the DS 1307 chip (which gives you the time and date). 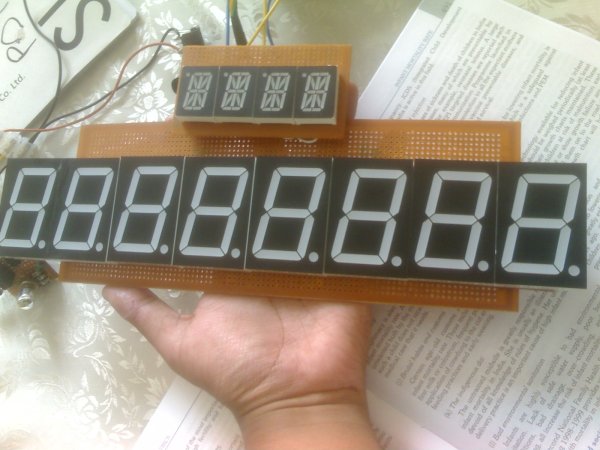 Both Red and Blue LED Displays are driven using NPN transistors ( I used 2N5551 NPN transistors).  The bases of these transistors are connected to the Arduino mega 2560 ‘s digital pins.
The Arduino is also connected to 4 pushbuttons located separately on a small perfboard.  These pushbuttons allow the user to set the alarm time.  The arduino is also connected to a SAMSUNG DVD player front panel via optoisolators hence allowing the arduino to start the dvd player once alarm time is reached.  That basically means that once you have set the alarm time, lets say 6 a.m, the dvd player will play your favourite CD at 6 am and you can stop it by using your DVD remote control or pressing Power button on your DVD player.
I have below some images of the build process which I would like to share with you.

Above is a picture of the displays I used.  The upper 4 displays are 16 segment LED Displays used to display DATE and TIME alternately and light up red… they are also used to show ALARM function. The large displays are 8 in number and light up blue. Whole board measures 40 CM wide.