Cheap Chinese RC toy cars can be had for about 5 Euros in the local market. The wireless brains behind the majority of these cheap RC toys is a pair of very cheap ICs the TX2 and the RX2. Yup, that’s what they are called. So this tutorial is focused on the TX2/RX2 based remote controlled toys.

I bought one RC toy car a while ago and used the Arduino with an IR sensor to drive it. Then I figured why not use the Arduino to drive the radio control mechanism of the car. You can see a video of the steps involved and the final  operational circuit here:

I mentioned in my other projects how hard it is for most people in Jordan to afford buying electronic components because of the very low income,  absurdly high tariffs (mostly to feed rampant government corruption), and arbitrary security procedures. So scavenging parts from cheap gadgets is the way for most young makers I know to sustain their passion for electronic innovation. 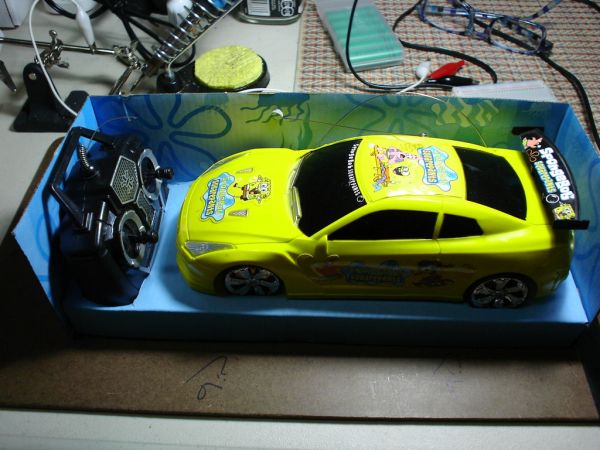 CREDITS
Special thanks to Eng. Jafar Quttaineh for his invaluable assistance.

FEEDBACK
Your feedback is most welcome to help me improve my future projects.

I extracted both receiver and controller circuits from the RC car but you may find it easier to just work with the transmitter + Arduino while leaving the receiver and the car intact. This might be simpler for some of you since you have to only worry about dissecting and wiring the transmitter to the Arduino. Also, the intact receiver + car will act as your test platform. It’s also more fun to end your project with your Arduino controlling your RC car instead of just looking at two naked circuits and a blinking LED. Your call.

The car has three main components.

1) Mechanical: For steering and locomotion, the car has 2 DC motors and associated gear. One motor provides locomotion from the back of the car, the other DC motor in the front provides steering left and right. I won’t be using the motors in this project but these toy cars are a great source of motors, gears, h-bridges, and other parts. So I am not throwing anything away.

2) Electronic: There are three main circuits. a) the transmitter b) the receiver c) the H-bridge. The transmitter and receiver are driven by the venerable TX2 encoder and RX2 decoder ICs. The h-bridge to drive the DC motors uses power transistors. Refer to the datasheet for more details.

PARTS NEEDED FOR THIS PROJECT

– 2 X  10K Ohm resistors. I use each in a series to connect the transmitter’s pin to the Arduino’s digital pin.  If you want to connect all steering functions (Left, Right, Back, Front) to the Arduino you will need 4 of those. 10K might be overkill but the circuit works.

– 2 X breadboards to place the transmitter and receiver for wiring. It just makes for easier handling and wiring. But you can do without the breadboard.

– Multimeter to test your connections.

– DC motors, small DC lamps, or relays to test your final TX2/RX2 system depending on what you plan to use it for.

I know some of you will be tempted to just use LEDs to test the rig. LEDs are nice and cheap and accessible. Since the receiver’s h-bridge (geek term for circuit that drives motors) switches between positive and negative voltage depending on whether it’s driving the motor in one direction or the other (e.g. Forward vs Back), we can’t just use LEDs as-is since an LED passes current in one direction only but not the other. But if you insist on using LED’s , I came up with a quick and dirty test circuit based on LEDs. I won’t describe it in detail because it’s not relevant to his project.

My LED testing circuit was put together on the fly. It’s a mini breadboard made up of two LEDs, two diodes, and two resistors both in parallel but rigged for opposite polarities. When the voltage is positive, one LED will turn on, when it’s negative, the other LED will turn on.

This is to simulate a motor turning one way (e.g. Right) or the other (e.g. Left).  You don’t need to do this test circuit. Just connect a small DC lamp or a DC motor to test your circuit. I am sure there are better ways of doing this but it was the quickest at the time. I might add two more LEDs to simulate the 2nd  motor’s Forward and Backward functions.

Step 2: Taking the RC car apart and re-wiring it with the Arduino

And now for the fun part. Putting the pieces together to give Arduino control over the transmitter.

For the purposes of this project, I am only connecting the Arduino to the Right/Left function pins of the TX2, pins 1 and 14. But the process is very similar to connect Arduino to the Forward and Back pins 5 and 4.

Keep the antenna connected to the receiver for better results. In a production environment, attach the original antennas back on the receiver and transmitter, to squeeze in every extra feet of transmission range.

The receiver circuit is also integrated with an h-bridge circuit used to drive the 2 motors. The yellow, green, and blue cables supply positive or negative voltage to spin the motor clockwise or counterclockwise. The RX2 receiver decides, based on the transmitter function signal, which DC motor spins and in what direction. In the final production, you can use the h-bridge output to drive relays or wheels, etc.