This Instructable will show you how to build an binary alarm clock, with a touch sensor snooze button. This is my first instructable and my first real arduino project, I hope you like it!

I bought an arduino a while back and I think it’s really nice, but I haven’t really done anything useful with it yet, so now I thought it was time to make a bigger project. I decided to do an alarm clock since my old one is broken.

There seems to be some problems with the video embedding,  If you can’t see the video above, here’s a link to it: binary alarm clock 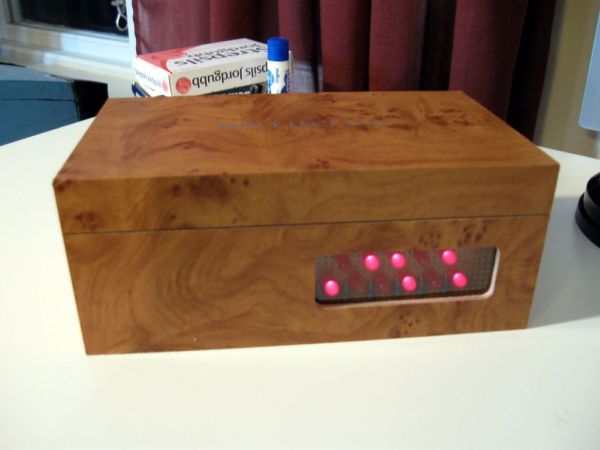 Step 1: What should be done?

To help me organize my thoughts about how I should build the clock I wrote down what I think an alarm clock should be able to do. I then tried to build the clock to meet the requirements.

Parts:
For the display:
– 11 LEDs
– 11 1kΩ resistors ( don’t need to be exact, anything between 300 and 2k should work (a lower value will give brighter light)
– Perfboard (I used perfboard with separate solderpads for each hole)
For sound:
– 1 Speaker (piezo or ordinary, if you use an ordinary speaker put a 1kΩ resistor in series with it)
For time and alarm setting:
– 2 Buttons (Hour button and Minute button).
– 1 Switch for changing between setting the time and setting the alarm.
– A piece of thin plywood.
For the touch sensor:
– Aluminum foil, or even better aluminum tape.
– Tape or glue to attach the foil.
– Paper in the same color as the box to hide the sensor
– Glue for the paper.
– 1MΩ resistor (you can play with this value a bit, depending on how thick your box is, a higher
value gives a more sensitive sensor (it will also make it a bit slower).
For everything:
– Hookup wire (solid core wire)
– Electrical tape
– Solder
– A box to put everything in.

Tools:
– A soldering iron
– Wirecutter and wirestripper
– Drill, or something else to make holes in the case for buttons.
– Saw 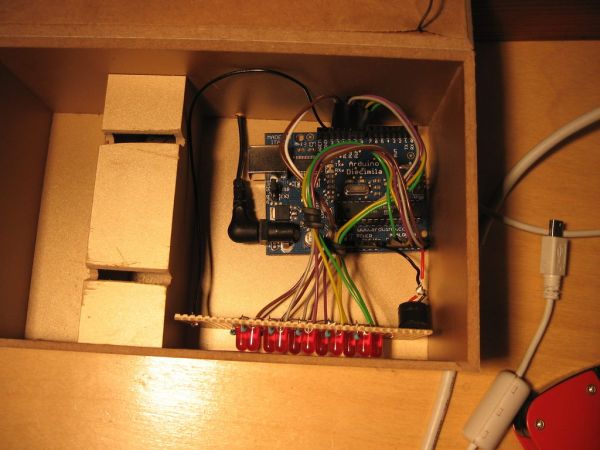 READ  Extra inputs for Arduino with a keyboard

I have divided the code for the clock into functions, one for each important bit of functionality. The functions are in separate tabs in the sketch. these are then run in the main loop:

If you change the DEBUG constant to 1 you will get some output via serial that can be good for troubleshooting, e.g. the time and what value the touchsensor returns.

I have tried to comment and make the code understandable but if you have questions or suggestions for improvements just leave a comment.