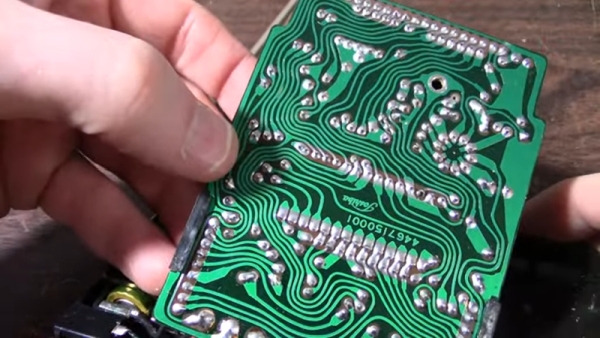 There was a time when any electronics student would have a slide rule hanging off their belt. By the 1970s, the slide rule changed over to an electronic calculator which was a pricy item. Today you can buy calculators at the dollar store. [JohnAudioTech] pulled out an old Radio Shack vacuum fluorescent display (VFD) calculator and found it didn’t work. Obviously, that means it is time to open it up.

It is fun to see one of these old devices opened up again. Consumer electronics with big through-hole ICs! Troubleshooting the device wound up being anti-climatic, as a broken wire to the battery compartment explained the whole thing.

As a teardown, though, this is a fun video. Not only are all the parts through-hole, but the PCB is clearly a manual layout with serpentine traces flowing across the board like some sort of art piece.

[John] even has a need hack for the calculator itself, if you happen to have one. Apparently, the calculator IC had a provision for a pi constant key, but there was no key for that function. Pressing the square root and 4 keys at the same time will trick the chip into providing pi anyway.

Another interesting item: [John] modified a cheap camera and removed the IR filter from it. Using that he was able to image the display’s cathode wire, which is normally difficult to see unaided.

There isn’t much need for a calculator now since your phone can easily do math ranging from a simple calculator app to symbolic math programs. But, like slide rules, we have a soft spot for these handheld computers.

If you don’t want vintage, an Arduino has plenty of power compared to these old machines. If, by chance, you want a modern calculator, they can also do plenty these days.

This is an Instructables on how I Remixed my old CNC Laser engraver and made a Stable version of an...