Entertain humans and pets alike with paper planes launched by your voice.

In this project we will take a look at a combination of some old and new technologies to achieve something even older, entertainment. Maybe I won’t have the timeline right but the technologies used in this projects are listed from the oldest to the newest below: 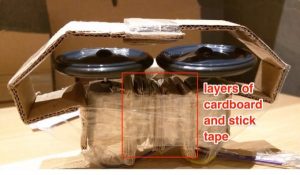 I’m using this simple model for the paper plane because it’s sleek, easy to make and flies very well. I’m using paper rectangles of 6.5 x 8 cm and the instructions are shown below (taken from here)

Here’s an animation showing how the plane is built

The Roof, the Bump and the Base

To launch a paper plane we use two motors to move two wheels separated by a small distance. The body of the plane passes between the wheels and it gets pushed as if we have launched the plane ourselves. I built something similar to what is shown in this video and added some structure so that I didn’t have to use my hands to make the planes take off.

The two components are a small base and a roof with a “bump”. Both components support the plane in position while it passes through the motors to get the push required to make it fly. I made a video describing the structure and you can see it in action below. 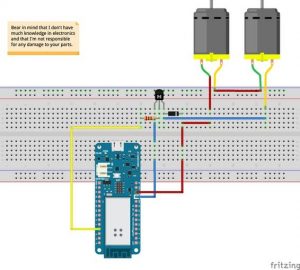 To create the whole structure I used cardboard and stick tape only. I started adding small rectangles of cardboard between the motors until I found the right number that separated them just enough to allow the planes to pass through while having a good contact with the wheels.

Once the two motors were joint together, I started adding the roof and the base following a similar principleho using the same small pieces of cardboard and stick tape.

While working on a new Instructable (coming soon) I had decided to use an Arduino Uno with an LCD/button shield...