The model of this shield named Yun Shield, the feature of this shield is as its name. User can add this shield into Arduino (Leonardo, UNO, MEGA2560 etc) and “turn” the Arduino into device which has similiar features as Arduino Yun: support remote upgrade and use the Bridge library. 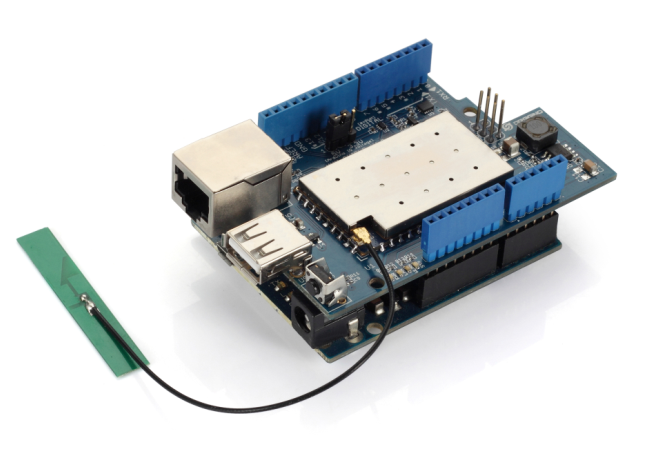 With this shield, user can easy to set up communcation between Arduino and Internet (via ethernet , wifi or 3g etc) and add support for USB flash, video. The detail user guide/ manual can be found in the dragino website and most Arduino Yun Sketch / examples can reuse with this Shield. This shield is under production and will be ready within one months time.

Basically, Yun Shield + Leonardo equally to the official Arduino Yun, but Yun Shield is more flexible because it can work with other Arduino board such as Uno, Duemilanove, Mega etc. And Yun Shield uses external wifi antenna which provides stability and possibility for various environments.

The Dragino HE is the core module of Yun Shield. The HE module requires around 200ma current when in full load, so it is powered by the Arduino VIN pins to avoid overheated in the Arduino onboard 5v LDO. So when Yun shield is in used, the Arduino board should be powered by DC port instead of USB port. The DC input can be 7v ~ 15v.

The USB Host of Yun Shield gets power from the Arduino +5v pin, since the +5v from Arduino comes from the +5V LDO, to avoid overheated on the Arduino Board, when the USB host is in used, it is recommended to use +7v DC.

The RJ45, WiFi, USB Host and Failsafe are connected to the Dragino HE module directly. And the

Dragino HE module use SPI and UART to communicate with Arduino Board. Yun Shield is compatible with 3.3v and 5v Arduino board. The on board jumper SV1 is used to set the SPI and UART to 3.3v or 5v level.

The SPI interface is used to upload the sketches comes from the Arduino IDE. SPI interface only connects to Dragino HE during uploading so the Arduino SPI can still be used to connect to other SPI slave devices.

The UART interface is used for the Bridge class in Arduino, there are lots of examples explain how to use the bridge class in the Arduino IDE. It is the core of Yun solution. We must make sure the serial Interface of Arduino is not used by other hardware.