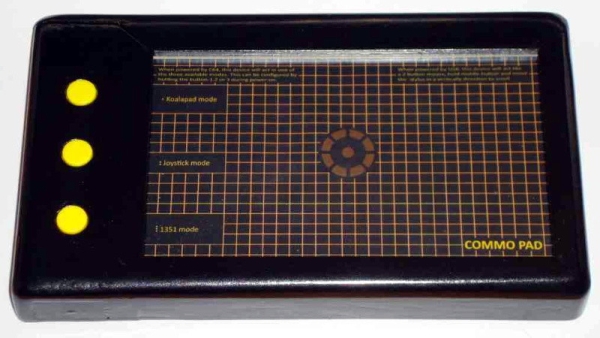 A RETRO TOUCH PAD YOU CAN USE ON MODERN COMPUTERS

As [Jan Derogee] explains in the faux-retro video after the break, drawing on classic 8-bit computers was something of a pain. The rudimentary light pens and joysticks of the 1980s allowed for free-form input, but were clumsy and awkward to use. Which is why he set out to create an ideal drawing device for the C64 using modern electronics. For the sake of completion, he also gave it a USB HID mode so it would work on somewhat more modern computers.

His device, which he’s calling the Commo Pad, looks like it could have been transported here directly from the 1980s, but it’s built from entirely new hardware. The case is actually made of wood that [Jan] sanded and painted to give it that chunky plastic aesthetic that we all know and love, and the retro artwork on the touch panel really goes a long way to sell the vintage vibe.

Speaking of which, the touch panel is perhaps the most interesting component of the entire build. It’s actually a resistive panel that was meant for mounting to an LCD that [Jan] has connected to an Arduino. All he had to do was provide a stable frame for it and print out some art work to slide in behind it.

The Arduino and associated electronics allow the Commo Pad to be picked up by the C64 as either a joystick or mouse, which means it doesn’t need any custom software on the computer side to function. Similarly, it can also mimic a USB mouse if you want to plug it into something made a bit later than 1982. Should you be so inclined to make it wireless, the addition of a Bluetooth seems like it would be relatively trivial.

If the Commo Pad doesn’t have enough of a retro-futuristic vibe for your tastes, we recently covered a custom optical touch panel that looked like it could double as a prop from Blade Runner which might do the trick.

Source: A RETRO TOUCH PAD YOU CAN USE ON MODERN COMPUTERS

This project will show you how to build an irrigation controller for a home garden. Capable of measuring soil moisture...