Wolfson gets into copiers and scanners

The WM8232 is a 16-bit analogue front end/digitiser IC which processes and digitises the analogue output signals from CCD sensors or Contact Image Sensors (CIS) at pixel sample rates of up to 35MSPS.

The output from each of these channels is time multiplexed, in pairs, into three high-speed 16-bit Analogue to Digital Converters. The digital data is available in a variety of output formats via the flexible data port.

The WM8232 has a user selectable LVDS or CMOS output architecture.

A programmable automatic Black Level Calibration function is available to adjust the DC offset of the output data.

The WM8232 features a sensor timing clock generator for both CCD and CIS sensors. The clock generator can accept a slow or fast reference clock input and also has a flexible timing adjustment function for output timing clocks to allow use of many different sensors. 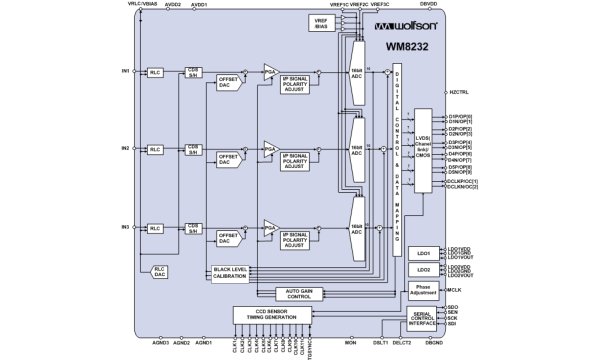 Wolfson has announced a range of analogue front end digitiser chips for digital copiers and scanners.

Part of the firm’s imaging portfolio, the WM8232, WM8233, WM8234 and WM8235 process and digitise the analogue output signals from CCD sensors or contact image sensors.

“They offer a variety of channel and ADC configurations, allowing system designers to choose the configuration which best suits their purpose,” said Wolfson.

The parts will be sampling from August, in a 56-lead QFN package.

For more read: Wolfson gets into copiers and scanners

Who Can Build The Best P-O-V Contest

How to Build Your Own Handheld POV Want to enter the Pyro POV Contest but unsure how to build a...