This Instructable will show you how to modify an Altoids tin for a wireless 2×16 character display.

Using an Altoids tin was inspired by the need to have a small yet protective enclosure for a pair of Xbee modules recently bought from Sparkfun. I purchased the Xbee Pro modules with external antenna for the extended range the setup provides (useful for future projects). Then I realised I would need to mount the antenna socket and have a box to house the circuits.

There will be a ‘remote’ Altoids tin containing Arduino, LCD and Xbee module.

A second Altoids tin containing an Xbee module only. This connects to the PC with a USB to FTDI serial cable.

Data is sent from the PC using a terminal program such as the Arduino ‘Serial Monitor’ and appears on the Altoids display.

So here are some possible ideas for use with this setup: 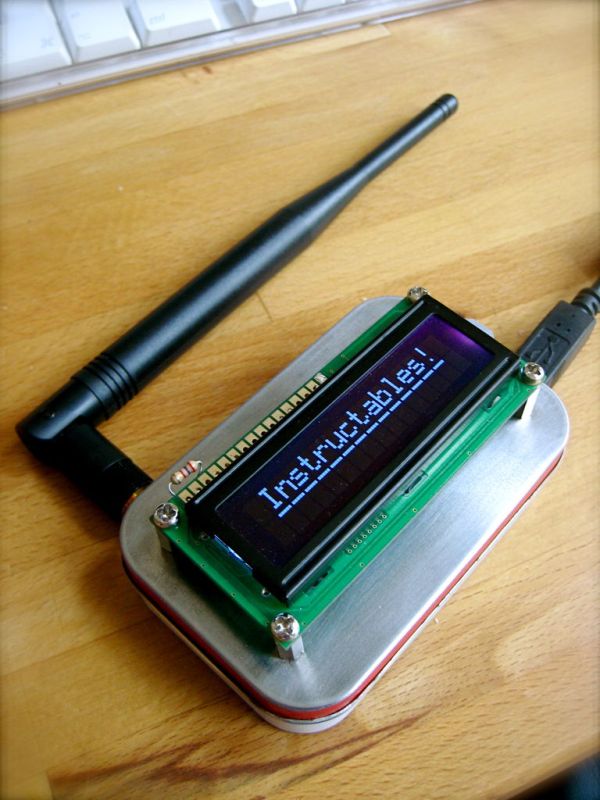 I realise that the Xbee modules can be quite costly.

If you still want wireless and you’re content with one-way communication then there are alternative radio modules such as these from HopeRF:
http://shop.jeelabs.com/products/rfm12b

I think it’s worth mentioning that this project can still be effective without wireless communication so why not create a neat USB desktop widget?

B) USB Version Only

If you just want to create a USB Altoids Message Display you’re going to need:

As iconic as the Altoids graphics are, I found that I quite liked the ‘brushed’ metal look.

Take some sandpaper and begin wearing away the top layer of paint.

(The finer the grade of sandpaper, the smoother the finish)

You will need to mark out and drill 6x holes in total. 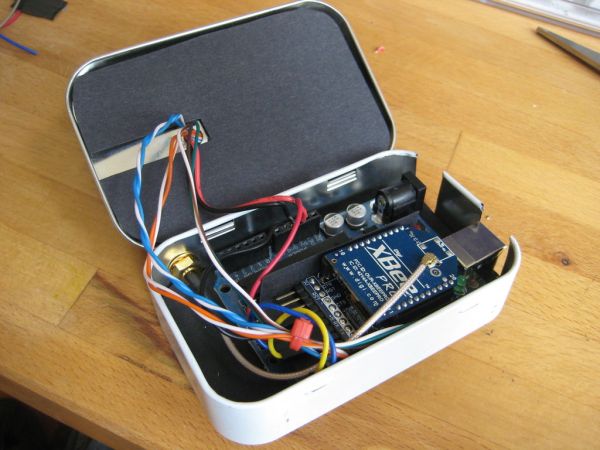 1. Place the the LCD over the top surface and mark 4x holes (3mm)
Alternatively you could create a cardboard template to be more accurate.

2. Use a larger, 6mm drill for the antenna socket.
I chose to mount the socket on the back left on the tin as this would allow the antenna to be folded down parallel to the case for storage.

3. The final 6mm hole (underneath display) will allow the wires from the LCD to pass through to the inside.

NOTE: Be patient when drilling these holes through the metal. I found that the best solution was to use a combination of a high speed setting and slow movement into the material. If you’re too quick, you can easily deform the metal.