NEW PROJECTS
Home News & Updates Electronics News Updates The WiPy: The Internet of Things Taken to the Next Level

The WiPy: The Internet of Things Taken to the Next Level

>>> The Internet Of Things

It’s concept is quite simple; the idea is to provide intelligence to everything that surrounds us, connect it to the internet, bring it to life, and make lots of cool things happen. Sounds nice, but how do you that? Here is the answer… 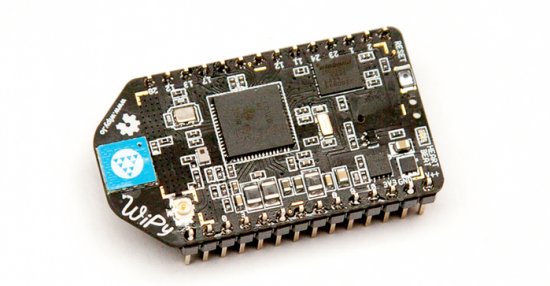 A small, super low power, inexpensive, and 100% Python programmable IoT development board. The WiPy takes the wireless freedom of WiFi and combines it with the power, flexibility, and ease of use of Python. We designed the WiPy from the ground up, with one goal in mind: “Let’s make IoT development fun both for beginners and professionals”.

The core of the software running in the WiPy is MicroPython, a lean and mean implementation of Python 3, specifically optimized in terms of speed and memory to be able to run efficiently on microcontrollers.

MicroPython implements the entire Python 3.4 syntax (including exceptions, “with”, “yield from”, and so on). Most of the core datatypes are provided: str (including basic Unicode support), bytes, bytearray, tuple, list, dict, set, frozenset, array.array, collections.namedtuple, classes and instances. You named it, it’s likely there. MicroPython is in constant development, so new features are added all the time (for example, it already has some of the features of the upcoming Python 3.5).

Python is a novice friendly language, very often selected by many schools to teach kids the basics of computer software, and yet, it’s in the core of professional applications and frameworks which drive the modern Internet (e.g: Django and Flask). Python offers high-level language features and libraries, yet it allows to go low level when fine grain control and real time behavior are needed, and MicroPython takes full advantage of all that.

For more detail: The WiPy The Internet of Things Taken to the Next Level