Have you ever thought of programming wirelessly ?    WiLoader is the answer. But HOW ???? WiLoader easily connects to your WiFi network, then you can program your AVR, Arduino boards and Robots. It doesn’t need any kind of cable for computer connection, especially those huge old USB ones. Because it employs WiFi, even your smartphone can be used to configure, communicate, control and monitor your targets via a WiFi-UART bridge. 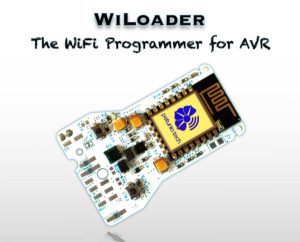 We will publish “Connected Robots” eBook for beginners in robotics. In this book, different fields of robotic engineering will be introduced and explained such as mechanics, electronics and software. Designing robot body and chassis, designing mechanisms and choosing the right motors, analyzing electronic circuits and devices, using Arduino as a brain for robot, programming Arduino boards and designing useful algorithms are some points that will be discussed. With the help of this Do-It-Yourself book, you are going to enter the world of robotics and you will be capable of designing and building your own ideas. Furthermore, the Connected Robots concept will be explored. Contents of this eBook are simple, straightforward and easy to understand and employ.

WiLoader is easy to set up, use and control. Since Arduino is an open source software and also has a lot of cool features and rich libraries, we will release a software patch for Arduino IDE to support and handle all WiLoader capabilities. WiLoader can be chosen like any other programmers inside the Tools menu. It is compatible with all operating systems and it performs flawlessly.

WiLoader has a WiFi-UART bridge called WiCOM. You can send and receive serial data over WiFi by connecting WiLoader dedicated serial pins to AVR UART pins(RX, TX). Just like other COM ports that Arduino serial monitor uses for communicating and debugging MCUs.

Building a real-life version of the Star Trek tricorder has been the goal of engineers and hackers alike since the first time...