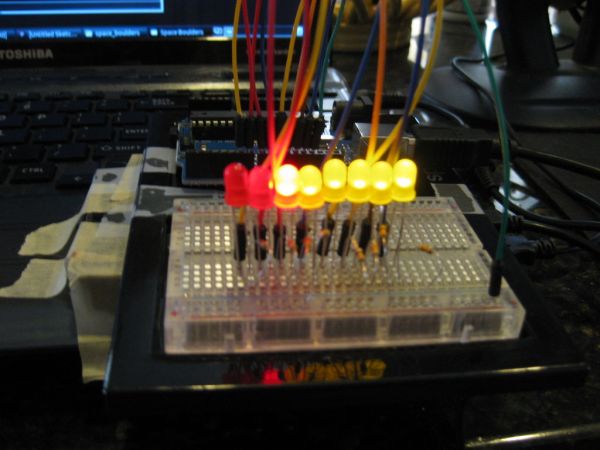 This tutorial is interned for Unix users. If I am correct, small tweaking should allow it to work on Windows. Maybe some day I’ll re-write it for Windows users.

You may be wondering how it works at this point, before you get started. All of the real work is done with a perl script.

1. A perl script clocks the processor.
2. The script uses that number to come up with a number from 1-9.
3. The script throws that number to the Arduino, using Serial connection.
4. The script get repeated over and over, for an infinite amount of time.
5. Each time the Arduino receives ten numbers, it averages them, and shows the average on the bar graph.

It’s as easy as that!

All perl modules can be downloaded from cpan.

Step 3: Set up the perl script

Here is where you will create the main perl script. Let’s begin:

This would be the location of your perl interpreter. More code:

All of these things initialize the connection with the Arduino. You should change what needs to be changed to make it fit your needs.

This chunk of code clocks the processor and puts it on a scale between 1 and 7. Some things need to be changed, such as your processors minimum clock speed, and your max divided by the number of leds. For this project, there is 8 leds.
Finally, add: 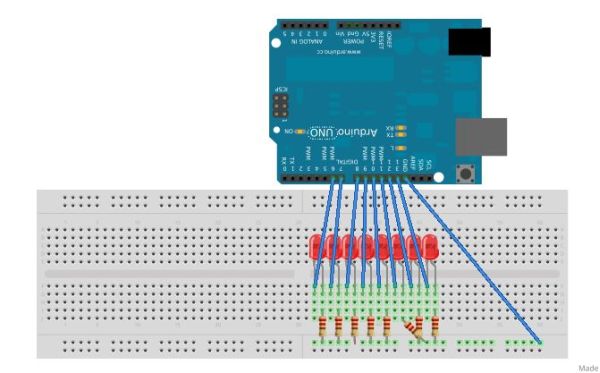 $arduino->write(round($send)); #Rounds the number, and sends it to your Arduino

This code is in charge of sending it to the Arduino.
Save all that code as clockandsend.pl
Now, this will only clock and send one number. You want to create another script to run this one over, and over again. For example:

Amanda Ghassaei has published on her website an interesting project: the Glitchbox. This instrument can do two different things: -it...