Hi guys, welcome to today’s tutorial. Today we will look at how to use a hall effect sensor with Arduino. 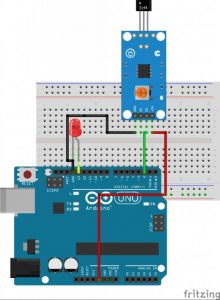 Hall sensors are becoming very popular due to their versatility and they are used in many different applications. One of the popular applications of hall effect sensors is in automotive systems where they are used to detect position, measure distance and speed. They are also used in modern devices like smartphones and computers and also used in different type of switches where the presence of a magnetic field is used to either activate or deactivate a circuit.

Hall sensors produce either analog or digital output depending on the particular sensor. Whichever type, they usually come in a three pin package with one pin to represent signal and the other two to provide power to the sensor. This makes easy the connection to any microcontroller.

The following components are required to build this project.

As usual, the exact components used for this tutorial can be bought via the links attached to each of the components listed above.

The schematic for this project is a simple one, as all we have to do is connect the three pins of the hall sensor and an LED to the Arduino. Connect the components as shown in the schematics below.

BCD TO I2C: TURNING A NIXIE COUNTER INTO WHATEVER YOU WANT IT TO BE

Whenever a project calls for displaying numbers, a 7-segment display is the classic and straightforward choice. However, if you’re more...