USB 3.0—Everything you need to know 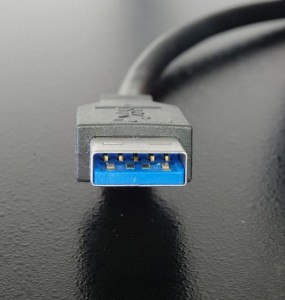 In the last 14 years, the Universal Serial Bus (USB) has become the standard interface to connect devices to a computer. Whether it’s an external hard drive, a camera, the mouse, a printer, or a scanner, the physical connection to transfer data between devices generally is a USB cable. The interface is indeed universal.

USB 3.0 is the third major version of the Universal Serial Bus (USB) standard for computer connectivity. Among other improvements, USB 3.0 adds a new transfer mode called “SuperSpeed” (SS), capable of transferring data at up to 5 Gbits/s (625 MB/s), which is more than ten times as fast as the 480 Mbit/s (60 MB/s) high speed of USB 2.0. Beside different connectors used on USB 3.0 cables, they are also distinguishable from their 2.0 counterparts by either the blue color of the ports or the SS initials on the plugs.

A successor standard named USB 3.1 was released in July 2013, providing transfer rates up to 10 Gbits/s (1.25 GB/s, called “SuperSpeed+”), which effectively put it on par with the first version of Thunderbolt.

A number of changes have been implemented in USB 3.0 to satisfy the increased demands of external devices. Here is a quick overview of USB technology:

READ  A simple DIY Oscilloscope with Arduino Uno and Mega

The “SuperSpeed” bus provides for a transfer mode at a nominal rate of 5.0 Gbit/s, in addition to the three existing transfer modes. Accounting for the encoding overhead, the raw data throughput is 4 Gbit/s, and the specification considers it reasonable to achieve 3.2 Gbit/s (0.4 GB/s or 400 MB/s) or more in practice.

All data is sent as a stream of eight bits (one-byte segments) that are scrambled and then converted into a 10-bit format, using what is known as 8b/10b encoding. This helps to reduce electromagnetic interference (EMI). The inverse process is carried out at the receiving end. Scrambling is implemented using a free running linear feedback shift register (LFSR). The LFSR is reset whenever a COM symbol is sent or received.

The unit load has been increased to 150 mA and a configured device can draw up to six unit loads, which adds up to 900 mA. This exceeds USB 2.0 by 80% and leads to faster recharging or powering of more than four devices from a single hub. In addition, the minimum device operating voltage was dropped from 4.4 V to 4 V, which saves energy.

USB 3.0 suspends device polling, which is replaced by interrupt-driven protocol. As a result, idle devices won’t experience a power drain since a signal from the device is required to initiate data transfer. With USB 2.0, the host controller used to look for active transfers, slowly draining power. USB 3.0 supports idle, sleep, and suspend states, as well as link-, device-, and function-level power management

USB 3.0 can support up to 8m of passive cable compared to 5m for USB 2.0 and 4.5m for FireWire. It is almost comparable to Camera Link in terms of cable length (10m) but much shorter than Gigabit Ethernet (100m).

Additionally, a USB 3.0 cable is capable of delivering 4.5W of power, enough to power a machine vision camera or a surveillance camera without any additional power supply.

The USB Video Class (UVC) standard provides a readily available USB driver for video camera software applications that reads data from an image sensor and sends control information to an image sensor controller. It is plug-and-play compatible with all personal computers and is commonly used in video capture applications like PC webcams.

The USB3 Vision standard allows reuse as many blocks as possible from existing standards like GigE Vision and Coax Press to significantly reduce design cycles. This helps eliminate the need to develop custom drivers and adds flexibility by supporting more sensors and controls to make Fit-to-purpose solutions for exact application requirements.

The frame grabber less camera interfaces like Gigabit Ethernet, USB 3.0 and Firewire have differences in CPU Load. For the same image size transfer, there is a low CPU load with FireWire and USB 3.0, because both interfaces work with DMA (Direct Memory Access).

The CPU load with GigE is considerably higher, because GigE requires copy processing. Say at a data rate of 85MB/s, the CPU load for USB 3.0 would be around 1%, while GigE will require around 6% CPU load. Thus, camera implementations using GigE adds the overhead of CPU load optimization on the designer. This adds more design cycle time as well.

USB 3.0 is backwards compatible with USB 2.0. So whether you get a new USB 3.0 device or a new computer that supports USB 3.0, your old device will be able to communicate with the new interface. Naturally, it will do so at the old USB 2.0 speed. However, you won’t be able to use a USB 3.0 cable to connect a USB 2.0 device.

For more detail: USB 3.0—Everything you need to know

Make Your Own Homemade Arduino Board with ATmega328 Chip

Arduino is an open-source development platform for engineers and hobbyists to develop electronics projects in an easy way. It consists of both...