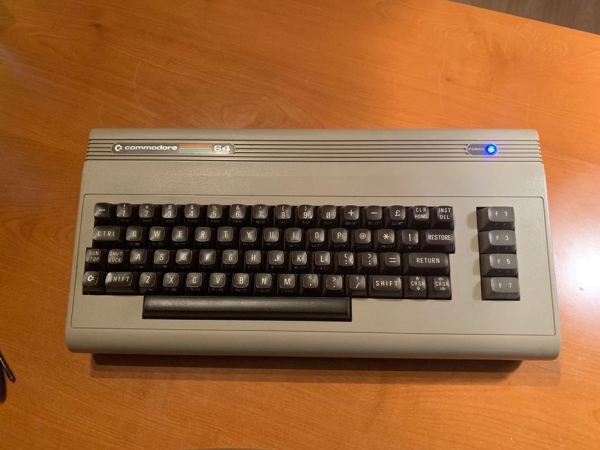 Turn a Commodore 64 Into an IOS Bluetooth Keyboard

This instructable describes how to turn a Commodore 64 computer into a bluetooth keyboard. It involves programming a micro controller with the Arduino IDE and constructing a circuit board.

Supplies you’ll need (some are optional):

First solder the header pins to the board if it didn’t come pre assembled.

Here is a good reference for the Adafruit Feather M0 Bluefruit LE:

Update the board to the latest firmware. My arduino sketch will not work unless the board is updated to at least 0.7.6. If you are running older firmware the sketch won’t work correctly or there will be performance issues. I confirmed my sketch runs flawlessly with versions 0.7.7 and 0.8.0. You can update the boards firmware over the air with your phone using the app Bluefruit LE Connect for (iOS or Android). I used the iOS app and you are given the option to upgrade or downgrade to many versions. Choose 0.7.7 or 0.8.0. I cannot guarantee that everything will work correctly for newer versions.

Next install the boards and libraries in the Arduino IDE needed for the sketch. Instructions can be found here:

Make sure you install both the Adafruit SAMD boards and the Arduino SAMD boards using the board manager.

Confirm that your board is working correctly by uploading some of the example sketches that you should see under example->Adafruit Bluefruit nRF51 if you installed the library correctly.

Finally, after confirming that the board is working properly, upload my sketch using the files provided in this step.

Remove the Commodore 64 motherboard if you have one in there, it won’t be used.

Clean the Commodore 64 keyboard contacts. Before cleaning mine the space bar and the F1 keys didn’t always register when pressed. After the below process everything worked great.

I tried the same cleaning process with rubbing alcohol at first and it wasn’t nearly as effective as the contact cleaner.

All the keys worked great after the cleaning.

Follow the reverse steps to reassemble the keyboard. Don’t forget to re-solder the wires to the shift lock key.

Step 3: Construct the Circuit on a Breadboard

The picture of the ribbon coming from the Commodore 64 keyboard shows how to identify the pin numbers. Pin 1 is on the side where there is a missing hole (which would be pin 2).

It matters which direction the diodes in the circuit are placed. Make sure the dark bands on the diode are on the side indicated in the picture. The diodes I used are 1N4148.

The RGB Led needs to be of the common cathode variety or it will not work correctly as wired in this circuit.

If everything has gone right, you should be able to connect the Commodore 64 to a device via bluetooth and have it work correctly as a bluetooth keyboard!

(note: comments in my arduino sketch also indicate what pins get connected to what)

Now that you’ve confirmed everything works properly its time to wire up a more permanent circuit. I did it using a technique taught in this instructable:

Shown in the photos is how I laid out my components.

I labeled all the pins on the diagram and drew in all the connections that needed to be made.

Be very careful and double check everything.

Once you’re sure everything is correct start soldering the connections using 30 gauge wire using the picture as a guide. I used a multimeter to make sure that there was an electrical connection between each thing I soldered and that there wasn’t between nearby pins that shouldn’t be connected.

I used female-female jumper cables and some crazy glue to make a cable for the RGB LED.

(note: on the horizontal 74HC595 I drew the connection for pins 9-16 underneath the numbers when the pins were really in the holes above the numbers)

Step 5: Add a Switch, USB Connector, and Mount to Finish It Off.

For the finishing stage:

The LED is set to be:

Note: in order to charge the battery the switch needs to be in the on position when connected to power via a USB cable.

I have only tested it on iOS devices and it can do everything I have thought to try. It should largely work on other systems, but I have not tested it.

The restore key is equivalent to the option key on a mac.

The Commodore key is equivalent to the command key on a mac.

The ctrl key is equivalent to the control key on a mac.

In order to use option shift commands press restore and the right shift key.

The right shift and left shift keys are different. In some cases they will not have the same results and are used to be able to type keys that are not shown on the Commodore keyboard.

Source: Turn a Commodore 64 Into an IOS Bluetooth Keyboard

We’re all pretty well-acquainted with the obstacle avoiding robot. These little inventions use a proximity sensor to detect an object...