Traffic light and pedestrian crossing implemented with an Arduino

This video shows the Traffic light and pedestrian crossing I’ve implemented with an Arduino. It’s a reproduction of the crossing near my home, timings taken from a video of it.

Incidentally, I produced the diagrams for this using a product called Fritzing.  It’s a nifty piece of software that allows you to draw a breadboarded version of your circuit, lay out the circuit schematic and then automatically design the artwork for a etched circuitboard. I haven’t experienced the latter, because of an autoroute bug in version 0.8 of Fritzing. 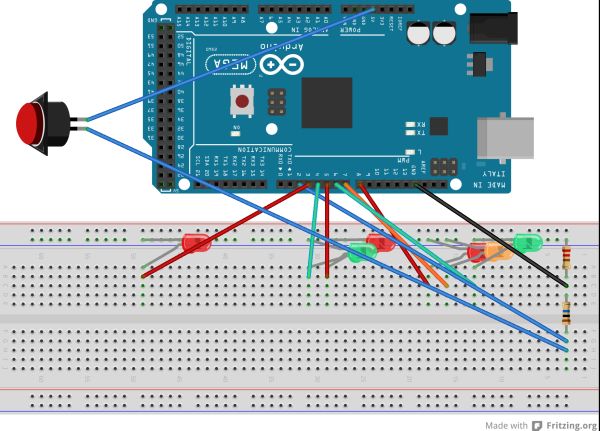 I exported the images as SVGs from Fritzing and discovered that WordPress won’t allow them to be uploaded because of security issues; presumably the ability to include JavaScript inside a SVG for animation (etc).  So then I exported as PNG, the lossless format.  One of the two images wouldn’t upload, but was acceptable to WordPress after scaling down. I started out publishing on the web using notepad and FTP, and look where I am now.

I’ve been using an Arduino Mega2560 as the development environment but I’m targeting something smaller for implementation. The code compiles (on the bulky Mega instruction set) to 3.5Kb, so I’m satisfied that as things stand I’m not going to blow any memory budget.

The LED lights all share a single 220 ohm current-limiting resistor, and the call button is pulled low with a 47K ohm resistor to prevent the input pin from floating all over the shop when the button isn’t pressed.

You may notice that the video doesn’t exactly match the diagram. That’s because it’s built out of bits and bobs I had lying around. The ~200-ish Ohm resister had leads that wouldn’t insert into the breadboard. Thus, alligator clips all over the place.

READ  Arduino Projects on a breadboard (no serial com)

The light cycle is handled with a state machine; the flashing of lights is effected via state changes. The state machine is triggered by interrupts; the ISRs (Interrupt Service Routines) are lightweight, with the “heavyweight” processing for the state machine occurring in response to changes made in the ISRs. To minimise the processing load in the buttonpress ISR a test has been cached in a variable.  The timer ticks over every half second, giving the state machine a half-second resolution – which seems to match what happens in the real world.

The state machine is initialized into a safe state of having the traffic face a red light, and the pedestrians facing the flashing red man.  That means if the system restarts in the middle of a crossing cycle, no one gets killed.

Although the timer is fired via an interrupt, it won’t fire during a delay() so the delay in the main loop is very short.

Although the environment gives an opportunity to develop an OOP solution, their wasn’t any clear need for that level of abstraction, and microcontrollers tend to feel the additional cost of indirection. For example, accesses to members of the state were costly in terms of instructions and lead me to consider using multiple single dimension arrays, accessed by pointer. 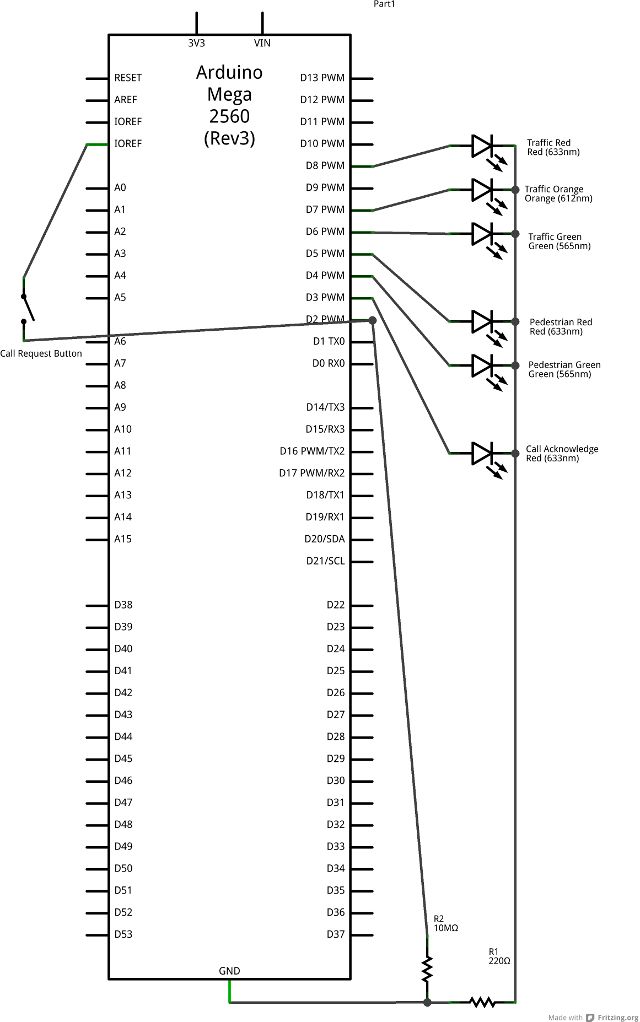 For more detail: Traffic light and pedestrian crossing implemented with an Arduino

Features 4-Switch Single Inductor Architecture Allows VIN Above, Below or Equal to VOUT Synchronous Switching: Up to 98.5% Efficiency Wide VIN...