Total Recall is a Simon based game for the Arduino. Your basic Arduino Simon Game consists of 4 buttons, 4 LEDs, an Arduino, some code and maybe a speaker and sound effects. Total Recall takes things a step further by adding an LCD display and offering  1 and 2 player game modes.

The 1 Player game is your basic Simon Game. I added 4 levels of difficulty to it by giving you options for how many rounds you want to play. Your then given a sequence of flashing lights to mimic. Each round adding an extra flash to the sequence. If you can complete the number of turns you win. 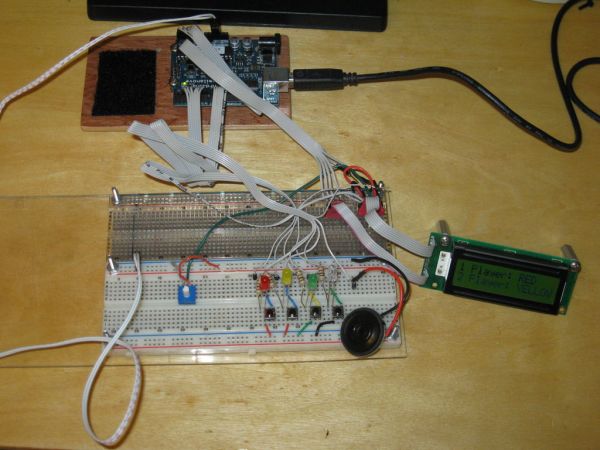 After posting Arduino Simon Says i started getting ideas for ways to improve the game. Whenever possible i like to simplify my code to reduce the amount of memory it uses. One of the things that really eats up memory in an Arduino sketch is using the Serial interface. Since the eventual goal is to get this game onto its own PCB and make it an actual portable game linking it to a computer to track your progress wasn’t going to be an option. Removing the Serial commands from the game dropped 2004 bytes from the compiled code. So to help me towards my goal of portability i decided to add an LCD display to the game.

Then i started thinking how i could make the game play even better. And what better way to make a game more fun then to play it with a friend. So i would need to come up with a menu system allowing you to choose between the 2 game types. I also wanted to make the original Simon game more interesting as well. So i decided it would be good to give people the option of how many turns they could shoot for. Nothing like giving people a goal to shoot for to make things more interesting.

Now a checklist of ideas was starting to come together.

All these ideas raised many questions.

Before i did anything i wanted to clean up the mess of wires a bit on the project. So i created three ribbon cables about 12 inch long from an old 40 wire IDE cable. I split the cable into 3 six wire strips and soldered header pins to each end. On one end of each i clipped the headers down to individual pins and split the wires about 2 or 3 inches up. The joined ends sit neatly into the Arduino while the split ends give me the freedom to reach any components i need. When all connected only Digital I/O pins 0 and 1 are left with nothing connected. I’ve been meaning to this this for quite some time. 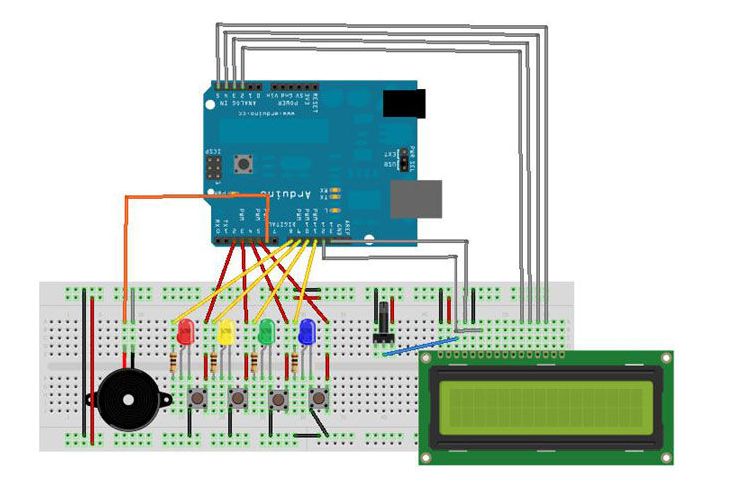 Now i was ready to figure out where to connect my LCD. Considering most of my Digital I/O pins where taken i had to figure out where i was going to connect the LCD. I wanted to keep as many of the LCD wires as close together as possible. This makes it a bit easier to troubleshoot any problem. I also didn’t want to move the LEDs and Buttons around. This would just add to the headach of updating the code. So i decided to place the LCD on the Analog In pins. The Analog Pins can be used as Digital I/O pins. The are designated as follows:

I couldn’t put all the LCD pins across the Analog pot cause i still need Analog pin 0 for randomization of the single player game. So the LCD is connected as follows:

You can refer back to the Arduino Simon Says Instructable concerning the setup of the rest of the hardware. The only change made was moving the speaker over to pin 6. I hope the Fritzing image helps to clear up any confusion there might be in the wiring. I went ahead and attached the Fritzing file if you need a better look at the diagram. You can also refer back to my Custom Large Font For 16×2 LCDs for more information about setting up a Hitachi HD44780 based 16×2 LCD on the Arduino.