For my monthly maker column in Dutch newspaper “De Volkskrant”, I made a coolbox in which you can control the temperature in three separate compartments to keep craft beer at just the right temperature.

The contraption I build uses three Peltier-elements to cool, an old desktop computers power source, an LCD to show both the measured and the set temperature and finally an Arduino to tie it all together. 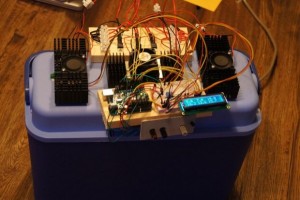 The micro-electronics to control it all:

READ  High-temperature versions of MEC switches now for the price of standard versions.

Proximity Sensing with the VCNL4000 + Arduino

I’m not really sure why, but proximity sensors are some of my favorite things in the sensor world. Maybe because...