I’m not really sure why, but proximity sensors are some of my favorite things in the sensor world. Maybe because there are so many of them? Who knows. Whatever the reason, the VCNL4000 is another proximity sensor that caught my eye, so I picked one up from Sparkfun on this handy breakout board.

The VCNL4000 looks like it is a single piece of silicon, but it really just is an infrared transmitter and receiver in a package that looks like a chip. Unfortunately, but much like many other proximity sensors the VCNL4000 can not easily be used for measuring exact distance. The way it works is that it shines a beam of IR light from an LED, and measures the intensity of light that is bounced pack. But that reading is not linear, so you can’t say 5cm is X so 10cm is 2X, it may only be 1.2X. Also note that because it is looking at reflected light, the surface of the object the light is reflecting off of will have an impact on the reading. So a reflective surface will read as a higher value than a dark matte surface even at the same distance.

But what makes this part special is that it also incorporates a pretty sensitive ambient light sensor. Also, unlike many other proximity sensors, the VCNL4000 does not have a simple analog output, but instead outputs a 16bit digital reading. So it is much more sensitive (32x) than what the Arduino’s native analog pins could do.

The VCNL4000 data sheet claims a proximity sensing range of 20cm. In reality, I was only seeing a reasonable change inside 10cm, with major change happening within 8cm. Also, 16bits over 20cm is probably hugely overkill, and I doubt you will be able to tell a sub-milimenter difference as the numbers would have you believe. At least not until you get about 3cm away as the sensitivity seems to be exponential. But if you need that kind of result, you probably should get yourself a laser. 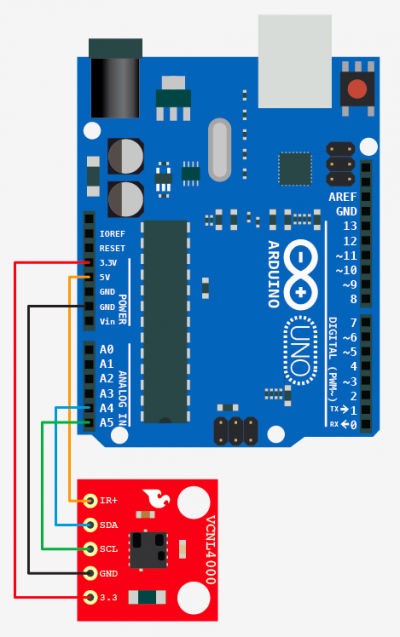 The ambient light sensor on this thing is really, really good. It’s very stable and in lower light it was able to pickup very small changes in light. Shadows that I could barely notice myself triggered a noticeable change in the reading.

For more detail: Proximity Sensing with the VCNL4000 + Arduino