I came across a bunch of stepper motors and I have since been looking for a project to do with the kids.

An old Telecran (French for Etch-a-Sketch) later, we are in business ! 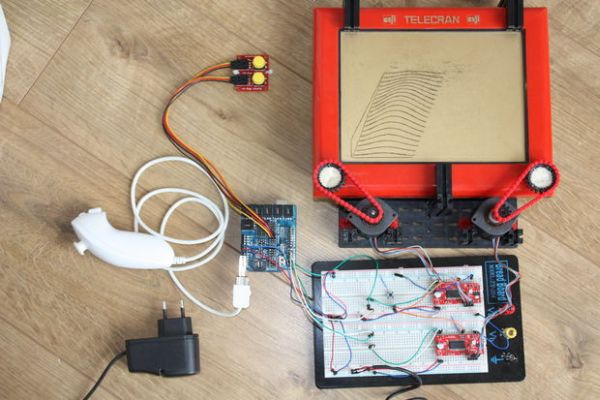 What I used for this project:
– an arduino Uno
– 2 stepper motors
– 2 easydrivers v44 (by www.sparkfun.com)
– various Fishertechnik parts (http://www.fischertechnik.com)
– a push button.

The mechanical part has been done with some Fishertechniks parts.

I had to drill into the stepper cogs as the axis of the steppers were 5mm where the FT standard is 4 mm.

The other cogs were simply hot glued onto the Telecran (Etch-a-sketch) knobs.

The rest is best explained in pictures…

Some details of the motors and the final assembly.

To drive the steppers I used a couple of easy driver board from Sparkfun.

Very straight forward. Note the emergency button that allows to put the motors to sleep in case of a runaway sketch.

I added a sensor shield to the arduino for convenience as I have a couple of push buttons (with a pull-up resistor) already cabled.

WiiChuck adapter is one of my favorite. Although the Nunchuck is a little more difficult to program than it may first appear.

If NUNCHUCK is defined then the code will be compiled with Nunchuck support.
The motors are then controlled exclusively with the Wii Nunchuck..