I got a couple of Microsemi’s C900502 10.525 GHz X-band Doppler radar motion sensors a while ago. This batch was made in UK and had “UK patents 2243495 and/or 2253108 apply” printed on the case. I have seen a teardown of an HB100 Doppler radar module before and was wondering if I this one is any different inside. 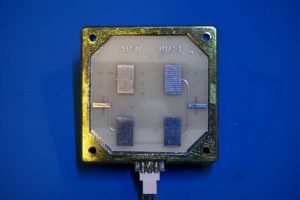 The C900502 transceiver has a very sturdy metal casing. It is measured at roughly 5cm by 5cm by 1cm. The transmitter and receiver antennas are patch antennas etched directly onto the PCB as you can see from the picture below:

On the back side you can see the patent number stamped onto the casing. There is an adjustment hole underneath the model number sticker. Using a screw driver, you can make fine adjustments of the transmitted frequency. Using this module is simple and only three connections are required: +5V, ground, and IF output.

And here is a picture of the circuit board. It is surprisingly elegant, only 5 discrete components (two active components and three passive components) are used. The board layout is strikingly similar to that of HB100. Perhaps HB100 is based on the same patents?

where the relative permittivity of the dielectric material is usually between 30 and 50. Barium titanate (BaTiO3) is a common material used for the dielectric resonator.

You can also see many distributed element filters on the PCB. Here you can see two radial stubs.

Read more: Teardown and experiments with a Doppler microwave transceiver