In the name of science, I introduced three of the worst 12V adapters (from My kingdom for a 12V adapter) to my bandsaw. What I found may shock you. 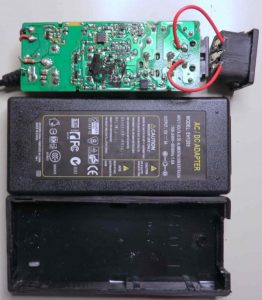 Note: All pictures can be zoomed or opened at full size in their own tab.

First on the chopping block, the “EH1205”. Wait! What’s this? The original AC connector is mounted to the PCB. Yes, this has been repackaged!

I think we can assume the approvals on the label are fiction. The current rating sure is.

Yes! Can you believe it? This board used to be in another adapter housing, or more likely, in an end-product. It seems Chinese manufacturing has sunk to a new low: repackaging used and/or surplus power supplies. On the plus side…recycling.

The original PSU actually appears to be of decent quality. There’s a robust EMI filter and 105° caps (or so they say). Note the cut DC wires and tacked-on LED. The cap adhesive has released. Caps are 400V & 25V.

There are two output diodes, paralleled from the dualTO-220

package. The board was held in place by two pieces of foam, which you’ll see is pretty high-end packaging, relatively speaking.

Next up, the “XY1205A”, again with its fictitious approvals & specs. Nothing horrifically wrong here, unless you count the tacked-on wires and lack of mounting. Good clearance between primary and secondary sides, except where there isn’t.

The board as it came out of the case. The metal plate is not part of the heat sink, but sticky-foamed to the transformer, serving no real purpose. This makes me think we have another repackaged power supply!

Removing the plate reveals the simplest circuit of the batch: No EMI filter (though space for one), no controller. The caps are 400V & 25V, “105°”.

The third adapter I opened provided a real surprise. Can you spot it before reading the caption?