In the era of Internet of Things, we wanted most of our home appliances to become smart. But currently, smart devices may cost much more than their offline counterparts and they often do not communicate with each other. Trying to overcome these limitations, A Ph.D student invented a way to turn entire rooms into smart with a single low-cost device called “Synthetic Sensors“. 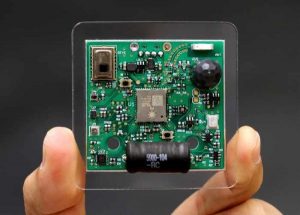 Gierad Laput, is a Ph.D. student of computer-human interaction at Carnegie Mellon University. His research program explores novel sensing technologies for mobile and wearable computing, smart environments, and the Internet of Things.

Synthetic Sensor is a general purpose sensor that is powered directly from a wall socket and tracks ambient environmental data to monitor an entire room. It removes the need to attach additional hardware to each of home appliances.

We explore the notion of general-purpose sensing, wherein a single, highly capable sensor can indirectly monitor a large context, without direct instrumentation of objects. Further, through what we call Synthetic Sensors, we can virtualize raw sensor data into actionable feeds, whilst simultaneously mitigating immediate privacy issues. We use a series of structured, formative studies to inform the development of new sensor hardware and accompanying information architecture. We deployed our system across many months and environments, the results of which show the versatility, accuracy and potential of this approach.

The device uses machine learning to recognize the events that happen in the room, like recognizing a particular sound pattern as taking a paper towel, but it cannot monitor when the roll may need to be changed. However, by using a “second order” sensors, the devices can capture counts and send notifications of the need to replenish. This capability can be scaled to an unlimited degree giving consumers highly specific and applicable feedback.

Developers can use the recognized events as triggers for other IoT applications. For example, one could use “left faucet on” to activate a room’s left paper towel dispenser and automatically schedule a restock when its supply runs low.

Most of smartphones parts are made of silicons and other compounds, which are expensive and easily-breakable. This problem is making...