MQTT is a lightweight messaging protocol for the Internet of Things. This post details the use of Stream support for large payload storage in the Arduino MQTT library.
MQTT is a lightweight protocol, but that doesn’t mean that the payloads have to be small. The spec was designed to allow for messages up to 256MB, but taking advantage of this with an Arduino can be difficult as they usually only have small amounts of memory in three pools:

For my latest project I got hold of a 23LC1024 – a 1024KB SPI SRAM chip with 5V logic levels making it easy to work with my 5V Arduino. I wanted to pass fairly large binary bitmaps around by MQTT, so I added support to Nick’s MQTT Arduino library for storing payloads using Stream objects.
I started by wiring the SRAM up to the Arduino’s SPI pins as follows:
There is currently no standard Arduino SRAM library (the Arduino site lists one, but the files are 404) so I knocked up a simple library which supports the 23LC1024. It should be good for the 23K256 as well, but I haven’t had one handy to do a test.
In the trivial example code below, we’re taking any message that comes through on inTopic writing it to SRAM and then reading it back and writing it to the serial console.
Note that the Stream object (sram) is passed to PubSubClient as the last argument of the instantiator to let it know you want it to write payloads to the SRAM. I’m storing the payloads at memory position 1, so I move there in setup with the seek method. 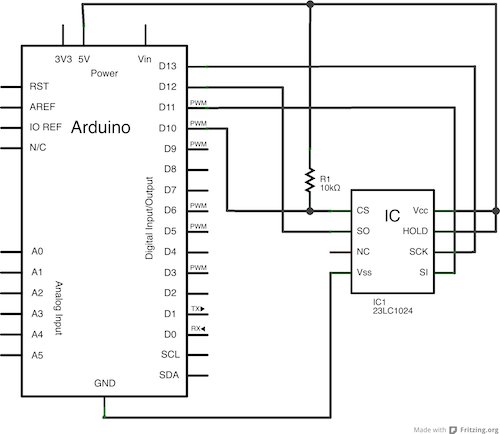 Once a payload is received callback executes. I move to memory position 1, read the message back and write it to the console, then move back to memory position 1 again ready for the next message to be written (if you were using an SD card for storage you might be opening and closing Files instead of moving to memory postitions).
The nice thing about this approach to storage is that many libraries will take a Stream object for manipulation which makes it easy to pass off a message for processing. I’ll take a bit more in my next blog post about how I used this approach to make use of 3rd party libraries to process my images.

For more detail: Stream support for the Arduino MQTT library

Please click below to visit our Kickstarter project page for Power Stacker, and pre-order a production model! http://www.kickstarter.com/projects/249225636/powe... Power Stacker...