Snake Game has been very popular since the beginning of the Mobile phones. Initially it was come in Black and white cell phones, and soon became very famous. Then with the advancement of the Cellphones, this game has also changed a lot, and now many graphical and colourful versions of this game are available.

Snake game has also become very popular DIY project for electronics Hobbyist and Students. So today we are going to demonstrate, Arduino Snake Game, with all its basic functionalities, while keeping it simple at the same time. 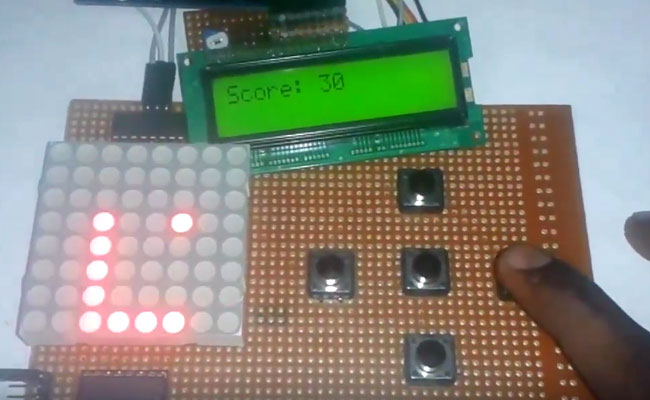 This is little complicated game to build. But in this tutorial, we have made it simple for you. To make this project, we have used an 8×8 red colour Dot matrix display for displaying the snake and its food dot, a LCD for displaying the points or score, 5 push buttons for giving directions and start the game and finally an Arduino UNO for controlling the whole the process. Pin diagram of 8×8 LED Dot Matrix Display with its original image has been given below: 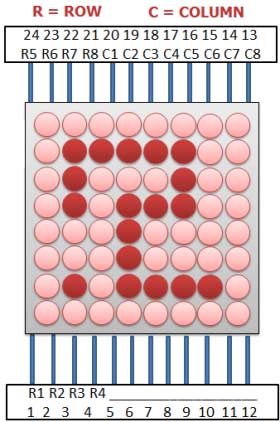 When we power up the circuit, first we show a welcome message and then a “Press Start To Play” hint on the LCD. After this, LCD shows the score as zero and dot matrix display shows two dots as snake and a single dot as food.

Now user need to press the middle button to start the game and snake start moving in upward direction by default. Then user needs to give direction to snake by pressing the ‘Direction keys’ around the middle button. Here we have used five keys (push buttons) namely Left key, Right key, Up key, Down key and Start key. Whenever the snake reaches to the food dot or eats the food, score increases by 5 points each time and the Snake length is increased by one dot (LED) each time, also snake speed become faster than before. And whenever snake would strike at any wall or reach at the end of LED matrix, then it would end the game (“Game Over”). Then user needs to start game again by pressing start key.

Security is a major concern in our day to day life, and digital locks have became an important part of...