nspired by drj113’s great instructable on making a word clock, I wanted to make my own.  After seeing the (extremely overpriced) commercial “qlocktwo” word clock, I decided to borrow its smooth glossy black design while basing the innards of my clock on drj113’s design.

In the end, I managed to stuff the arduino and LED’s inside an IKEA shadow box, and used printed transparencies to create the black letter mask. 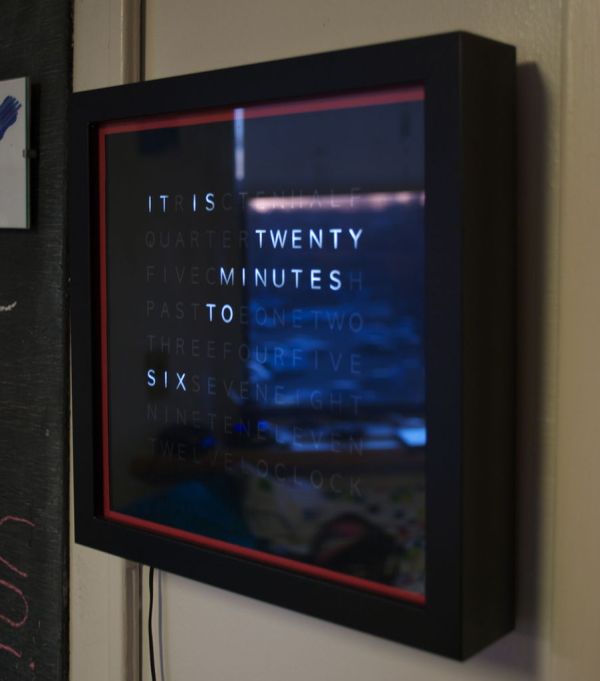 This is what you need:

optionally a breadboard is useful for prototyping the circuit

The key to making the clock look nice was making the glossy black letter mask.  I thought of several different ways to make the letters, such as silk-screening on the back of the glass, or having a custom black sticker made, but eventually I settled on printing black onto transparencies – see the attached PDF file.

Since there’s a lot of black ink, I had my transparencies printed at Staples for something like 50 cents a piece.  The ink wasn’t quite black enough to completely block out light, so I printed 2 of them and stacked them.  Depending on how dark your ink is you may need more or fewer layers to get an opaque black.

Cut off the clear parts of the transparency so only the black square is left.  Align the letters of the two layers and tape the layers together with double-sided tape on the top and bottom black regions – see photos 2 and 3.

Note: the viewable area of the Ikea frame is 8.5″ square, but unfortunately you can’t print all the way to the edge of the transparency. Therefore you need to cut a piece of construction paper to form a border and fill the gap – it also adds a nice touch of color.  Cut a piece of construction paper to be 9″x9″.  Mark lines 0.5″ in from each side forming an 8″x8″ square (photo 4).  Use a utility knife to cut out the inner square leaving a 0.5″ paper border (photo 5).  Tape the transparencies to the back of the border (photo 6).

Now, cut out a square piece of the black garbage bag big enough to cover all of the letters.  Tape this on the inside (back) of the letter mask to help diffuse the LED light and make the letters a dim gray when not illuminated.  Also, put a piece of black electrical tape behind each of the non-used spacer letters to make sure no stray light gets through.

(Edit 8/1/10: Added a better description of the construction paper border and more

Now comes the repetitive task of soldering all 98 LEDs and resistors.

We need to attach a resistor to each LED to limit the current that flows through it.  I chose to use 1Kohm resistors and drive the LEDs at 10mA (half their rated current), but you might want to use 470ohm or smaller depending on your power supply and LEDs.  Keep in mind that up to 31 LEDs will be lit at once (“IT IS TWENTY FIVE MINUTES PAST ELEVEN”), so if you drive each LED at 20mA you will need a 620mA power supply – this is part of the reason why I planned for 10mA a piece.

First, trim one lead of each resistor leaving about 3-5mm (see photo 1). 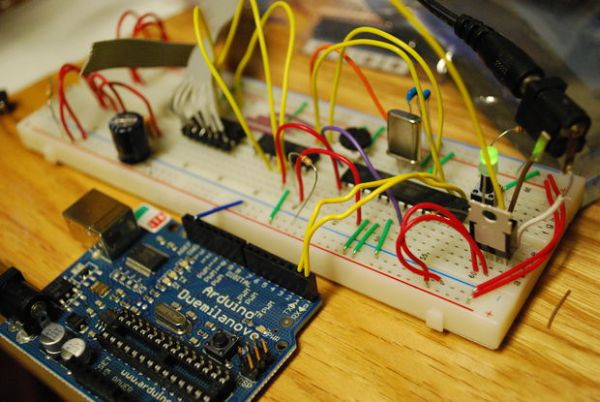 Next, prepare the LEDs:
– bend the leads opposite directions
– we’re going to attach a resistor to the anode (+) of each LED.  The anode is the longer lead, and is opposite the flat edge of the LED – photo 2
– trim the anode so that a small stub ~3-5mm is left (it shouldn’t even extend past the base of the LED) – photo 3

Now, solder a resistor to each LED:
– place the LED into some kind of jig to hold it steady – a piece of cardboard with a hole punched in it works well
– hold the short lead of the resistor next to the trimmed lead of the LED and tack them together with a bit of solder (photo 5)
– test the LED-resistor combo on a 5v supply to make sure the solder joint is good and polarity is correct (photo 6)