This lab most recently revamped by Edgar Berdahl and Wendy Ju. Chris Carlson, possibly Bill Verplank, and others have likely contributed.

For this lab you need your Satellite CCRMA kit, a laptop computer with Ethernet adaptor to program it, and some headphones with a mini 1/8″ (2.54mm) stereo jack.

You are also invited to bring the following optional items, but they are by no means required:

(Board shown underneath is the Beagle Board xM instead of the Raspberry Pi, but the idea is the same) 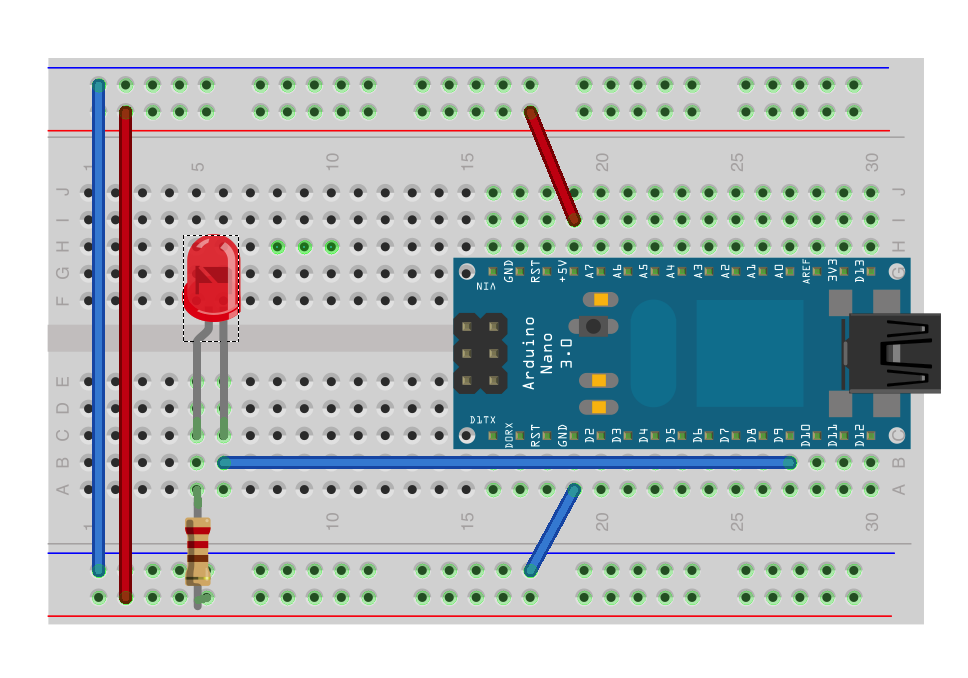 Power Up and Prepare Arduino

again, and you should now see the new device /dev/ttyUSB0 appear also, which represents the Arduino Nano.

Troubleshooting: If you do not see /dev/ttyUSB0, then try rebooting using sudo reboot to see if that fixes this problem. (If you reboot, this will take about 45 seconds, and you will have to login again using ssh. If that doesn’t work, come talk to us. If you are a Linux pro, you can try to debug the problem yourself by typing dmesg and looking at the result.)

Routing Power On The Breadboard

In digital circuits, the voltages are usually either high (5V) or low (0V, i.e. ground).

Build the Button and LED Circuit

Power an LED all the time

Build the following circuit on your breadboard. Use a 220 Ohm resistor (red red brown gold — see this page about resistor color codes).

Because the LED is a diode, it has a set voltage drop across the leads; exceeding this causes heat to build up and the LED to fail prematurely. So! It is generally important to have a resistor in series with the LED.

Next, we’ll insert a switch into the circuit. The momentary switches in your kit are “normal open”, meaning that the circuit is interrupted in the idle state, when the switch is not pressed. Pressing the switch closes the circuit until you let go again.

Use a multimeter to see what happens to the voltage on either side of the LED when you press the switch.

In the third example, we’ll replace the manual switch with an Arduino pin (set to output mode), so we can control the LED from our program. The safe way to do this is to let the Arduino pin sink current – if we toggle the pin low, it acts as ground and current flows through the resistor and the LED as it did in the previous examples. When we take the pin high, to 5V, there is no potential difference and no current flows – the LED stays off. 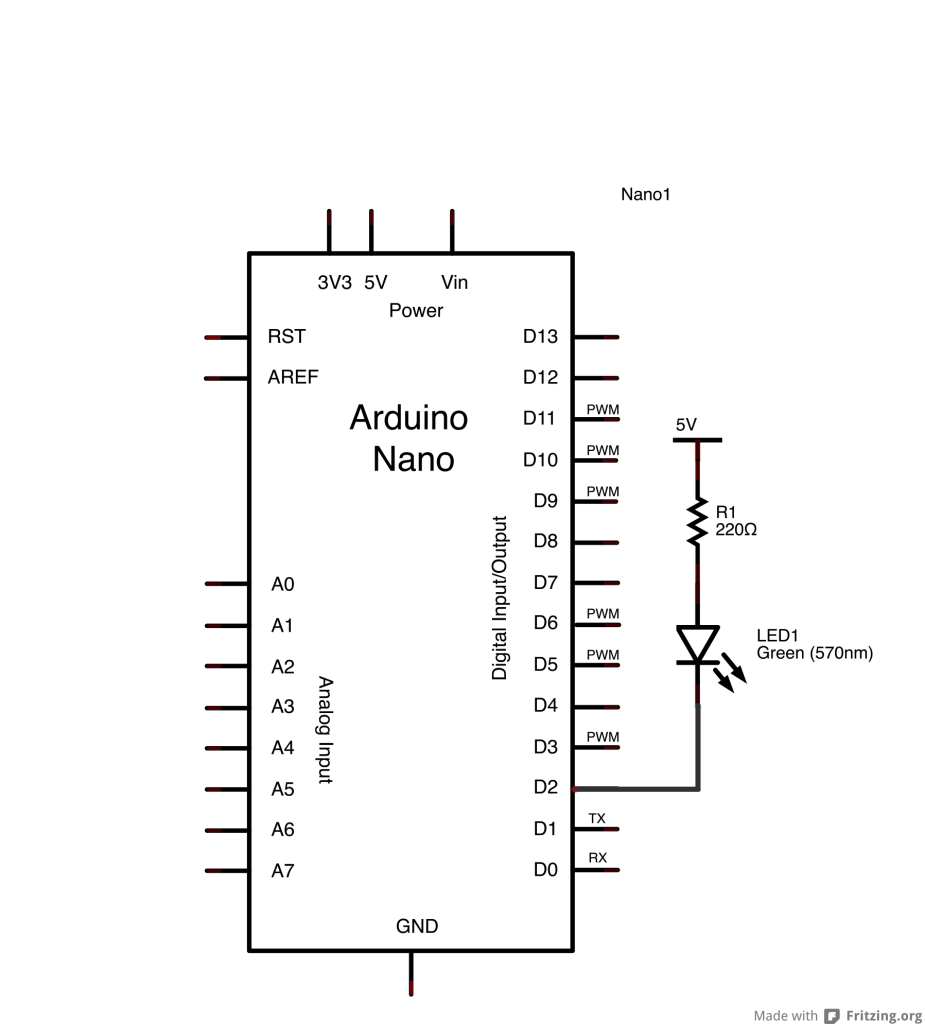 We’ve used code to trigger output – what about the other direction, sensing physical input in code? Just as easy. Here is a simple switch circuit:

When you press the button, you should see the digital pin 4 reading change in the “digital input readings” pane.

What about those “breathing” LEDs on Mac Powerbooks? The fading from bright to dim and back is done using pulse-width modulation (PWM). In essence, the LED is toggled on and off rapidly, say 1000 times a second, faster than your eye can follow. The percentage of time the LED is on (the duty) controls the perceived brightness. To control an LED using PWM, you’ll have to connect it to one of the pins that support PWM output – 3,5,6, 9, 10 or 11 on the Arduino. Then write a patch that cycles the PWM values.

For instance, for a single LED connected to pin D9:

Use the voltage divider equation to calculate hypothetically what A0 should be.