Seabird, a High-Performance Action Camera On a Budget With 4K HDR

Action cameras are becoming a buzz in the last few years, and the likes of GoPro have become the face of this emerging market, just like the way the iPhone was the default standard for the smartphone industry, GoPro camera has been the go-to camera for the Action camera industry. Despite the awesomeness of Action cameras, they usually come with one major limiting factor which is the cost. The likes of GoPro and another similar Action camera typically cost a fortune and they are not that affordable to the everyday users. 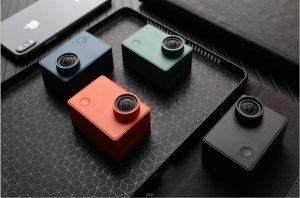 What if we could still get the same similar high performance as the GoPro HERO5 at a fraction of the cost? Yes, it is possible, and the likes of TRAWO by APEMAN made that possible, but the newly launched Seabird 4K Camera goes the extra mile regarding bringing down the cost of an action camera down to less than $100.

The Seabird 4K Camera is a high-performance FHD 4K Action Camera that promises so much. After recently laying my hand on the currently crowdfunding camera, I got marveled at the capabilities of the budget camera. Not only does it do the job well, but it also offers some elegance of class into it with its classy and appealing body.

The Seabird camera is capable of achieving 4K capturing and its video resolution can go as high as 4K (which is 4X more detail than HD) at an outstanding 30fps. Like other similar action cameras, the seabird still images captures at 12Mega Pixels providing crisp, clear images. The camera is capable of slow-motion recording on a 720p resolution at 120fps, of course, that’s not HD, but it is still good enough.

The seabird still images can be taken in single, a burst of 3p, 5p, and 10p, timer mode, and lastly a time-lapse mode giving users fantastic shooting experience and options At the core of the seabird is the HiSilicon Hi3559, 1/3.06“ CMOS technology, supporting a maximum of 60Mbps encoding, 1.12um pixel, and [email protected] recording. The below shows some crisp, clear images taken from my Seabird –

Read more: Seabird, a High-Performance Action Camera On a Budget With 4K HDR

This is a version 2.0 of one of my first forays into Arduino and DIY MIDI programming. I've developed my...