How To Save a Text In The EEPROM of The Arduino

A microcontroller might need to store its data like sensor value, or a particular count or image data for a long period of time. The most common type of memory used with the microcontroller based systems is EEPROM. The EEPROM stands for Electrically Erasable Programmable Read Only Memory which is a kind of Read Only Memory (ROM), which can be written and erased by means of electrically programming and hence the name. Once programmed the data it will remain in the memory for a very long time even if there is no power available. EEPROM memory is widely used in microcontroller systems where some particular data need to be retained each time the system is turned on and to save particular data before the system is powered off.

There are several EEPROM memory chips available which can be interfaced in a microcontroller based system with the help of serial communication protocols. Most of the microcontrollers also have small sized built-in EEPROM which can be used in small applications and hence the need for an external memory chip, circuit and code complexity can be avoided. 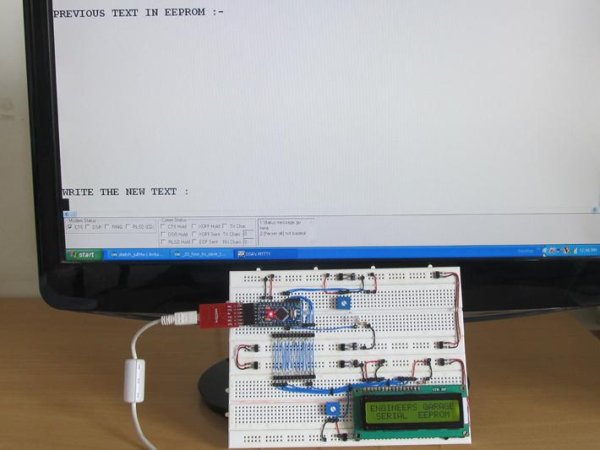 The serial communication protocols can be again used with those kinds of microcontrollers to connect the internal EEPROM with other devices or with the serial port of a PC.

The size of the data which can be saved in the internal EEPROM of a microcontroller is limited to a few kilobytes normally. Hence they are used to store some sensor values, counts or sometimes text like data from the GPS etc. This particular project demonstrates how to connect the internal EEPROM of the Arduino board with the serial port of a PC and save a text in it which can be read back even after the Arduino is powered off and turned on again.

The project also displays some text on the LCD with the help of the functions from the library <LiquidCrystal.h>. The important functions provided by the library <LiquidCrystal.h> are already used and explained in previous projects on how to interface an LCD, how to display sensor value on LCD, how to connect the LCD with the PC and how to make an LCD scrolling display.

In this project an LED is connected to the pin number 6 of the Arduino board which serves the purpose of indicating each data byte written by blinking once and also blinking continuously after the EEPROM runs out of memory. The LED is controlled by using the built-in functions of the Arduino IDE namely pinMode(),digitalWrite() and delay() which are discussed in the previous projects on how to get started with the Arduino, how to use digital input and output of the Arduino. 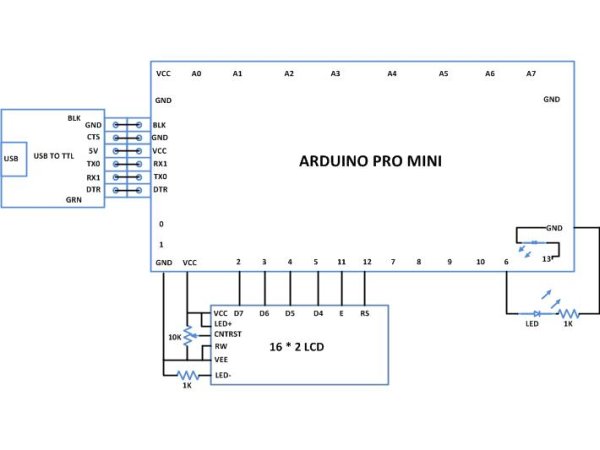 For more detail: How To Save a Text In The EEPROM of The Arduino

The purpose of a PLL is to generate a frequency and phase-locked output oscillation signal. To achieve this goal, prior...