As automotive electronics takes center stage at Electronica this week in Munich, a “microcamera” module recently designed by researchers at the Fraunhofer Institute for driver-assistance applications is expected to enjoy the spotlight.

The Ottawa embedded vision IP vendor CogniVue and Berlin’s Fraunhofer Institute revealed Tuesday that they have collaborated on development of the microcamera. It uses CogniVue’s image processing technology and a Freescale Semiconductor image cognition processor based on CogniVue’s IP.

The new camera module — an image sensor with optics mounted on a printed circuit board — measures 16x16x12 cubic millimeters. It is visibly smaller than current-generation driver-assist cameras, whose edge lengths are “20x20x20 cubic millimeters (without optics),” according to a Fraunhofer press release.

Cross-section of the microcamera module, with the image sensor mounted on the Printed Circuit board. (Source: Fraunhofer IZM) 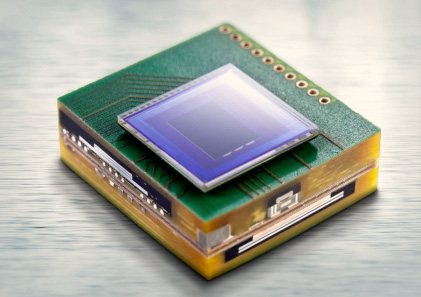 The trend among Tier 1s and carmakers designing ADAS cameras is to use a camera module already integrated with an image processing core. Rather than sending captured images to a chip located elsewhere for processing, they prefer a camera module with “a purpose-built processor for running embedded image and vision algorithms,” Wilson said.

It’s bad enough that complex in-camera image processing tends to make the module run hot. Worse is that ADAS cameras designed for reading traffic signs or collision avoidance must be mounted on the front — near a rearview mirror — inside a car. This is a poor location, especially under direct sunlight, he said, because it makes an already hot module even warmer. Hence, one of the big challenges for driver-assist cameras is “an image processor that can fit it into a very low number of watts.”

CogniVue takes pride in its Apex image-cognitive processor technology. Wilson said its performance per area per power for vision processing tends to be significantly better than conventional processor architecture. The Apex core is designed for efficient pipelining of embedded image and vision processing algorithms.

To perfect the miniaturization, researchers at the Fraunhofer Institute for Reliability and Microintegration IZM in Berlin crammed 72 passive and 13 active components (such as LEDs, DC-to-DC converters, memory chip, image sensor, and image processor) into the module. “the volume of the camera was reduced to 3 cubic centimeters with the optics, and 1.2 cubic centimeters without the optics,” according to Fraunhofer.

All the components on the new module are integrated directly into the PC board from glass fiber and epoxy resin. “By encapsulating the electronic components, the microcamera is now impervious to vibrations on uneven street surfaces,” according to the Fraunhofer research team.

How To Save a Text In The EEPROM of The Arduino

A microcontroller might need to store its data like sensor value, or a particular count or image data for a...