This particular project explains how to generate a random number with the help of an Arduino board. The Arduino is an easy prototyping platform which is popular among both the hobbyist and experts due to its simplicity, ability and also due to the help available from the internet. The Arduino board is basically an AVR based board including all the required hardware for the microcontroller to function properly and also is flashed with the Arduino boot-loader. All the Arduino boards are compatible with the Arduino IDE which helps to compile the code and to program the board. 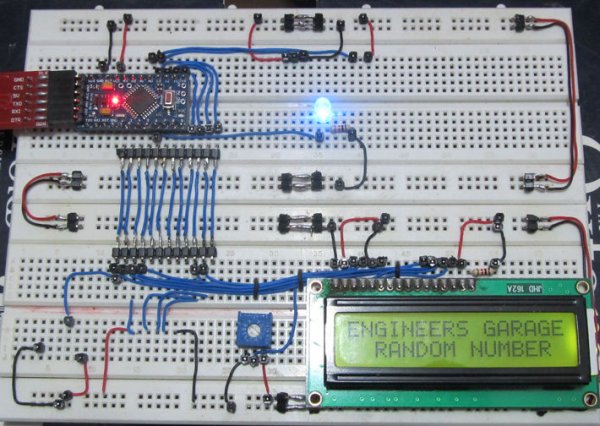 This particular project uses the Arduino pro-mini board which has a very small size and can be connected with bread board compatible connectors. The board comes with either ATMEGA128 or ATMEGA328 controller inside it which operates with a crystal frequency of 8MHz or 16MHz. The Arduino pro-mini board has digital pins marked as 2, 3, 4 up to 13. In an Arduino board some of the digital pins can be configured as analog output pins and there are also dedicated analog input pins which can be used for voltage sensing applications.
(check the images above)

For basic understanding of Arduino, you can go to this project and check how to get started with the arduino and try out all the things discussed there.The Arduino pro-mini board has 8 analog input pins marked as A0, A1 up to A7. They are actually the input channels to the built-in ADC of the ATMEGA328 which can read the analog value and convert them to the digital equivalent. In normal analog voltage sensing applications the required analog input pin will be connected to a voltage which needs to be read. Suppose the situation in which the analog pin is left unconnected. The voltage at the pin is undefined and hence when read using the ADC the digital output will also be an undefined random value. This is the basic method by which a random number is obtained.

The first random number obtained from the hardware is called a ‘random seed’. This random seed is then applied to algorithms called random number generating algorithm which can generate a random number which inside a specified range. There are built-in functions in the Arduino IDE which helps in generating random numbers. This particular project makes use of two functions namely randomSeed() and random() and the details of the function are discussed below;

This particular code reads a random value from the analog input pin A0 which is left unconnected so that each and every time the code runs it can generate different set of random numbers.

The code written for this project initializes pseudo-random number generator with a random value read from the analog input pin A0 and uses the function  randomSeed(). The function used to read the value from A0 is analogRead() function which is already discussed in the previous projects on how to use analog input and analog output of Arduino board, how to use Arduino to display sensor values, how to make dynamic sensor display using Arduino, how to save sensor values in the EEPROM of the Arduino.

The function random() is then used to generate a pseudo-random number and is send to the Serial monitor window with the help of the functions Serial.begin() and Serial.write() which are already discussed in previous projects on how to do serial communication with the Arduino, how to send and receive serial data using arduino, how to do serial debugging with the Arduino.  The code also glows an LED using the same random number to vary its brightness by writing the same value to the analog output pin where the LED is connected. 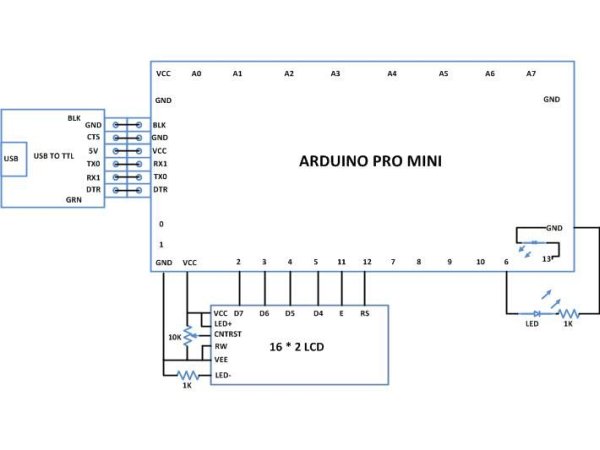 // include the library code:
#include <LiquidCrystal.h>

I'm going to go through my process of hacking a Moog Etherwave Theremin. I created a new acrylic top, partially...