This chimera is a microcontroller emulation of a UK101, an 8-bit microcomputer from the early 1980s. Needless to say I had one; it is a shocking thirty-three years since, as a spotty teenager, I soldered one together over the course of a few days. I recall the kit cost the equally shocking sum of £99.95 (a lot of pocket-money), and had to be smuggled through Irish customs in my parents’ car because the Single European Market was at that time merely a twinkle in M. Delors’ eye. In its original configuration it had 1k of user RAM, 1k of display RAM, 8k ROM Basic (from Microsoft) and a 2k ROM monitor. When it went to its present resting place in the attic a couple of years later, it had 16k of user RAM, 2k of display RAM and an additional 6k of utility ROM, all piggy-backed on the original chips. 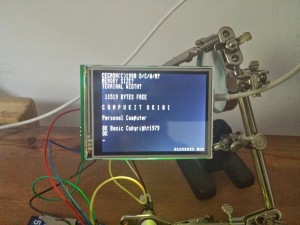 The last time I had patently too much time on my hands, in 1997 (seventeen years!), I hacked together a software simulation of it. I had intended this to be a general purpose simulator but it fell by the wayside after the UK101. In the intervening time I’d often regretted not writing the simulator in Java (indeed, a very good Java-based simulator now exists) but luckily where microcontrollers are concerned, C/C++ is still the only game in town, and most of the code compiled under the Energia IDE.

The hardware is almost insultingly simple, there are five components:

While the Launchpad has only 16k of RAM, of which 12k is used for the main memory and 2k for the display, it does have 256k of flash, easily enough to contain all of the ROMs I’ve collected for it. (Another UK101 hardware instantiation can support the full 40k of user RAM.)

READ  Thermal design: Get the heat out of the electronics
Share this: