Reginald started from the simple, yet bold idea to control a bot from anywhere in the world with a live video feed. What I wasn’t expecting was for Reginald to develop into an involved, feature rich project. With my work and money, I was able to complete a project exactly to my satisfaction and more. This tutorial chronicles the entire project: from top to bottom. 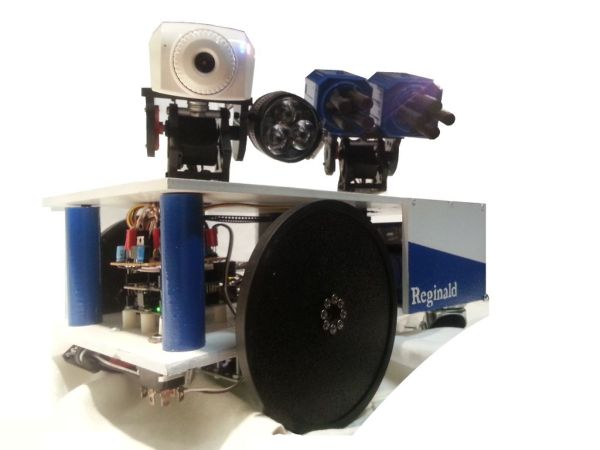 Before I started my project, I had several goals that I wanted to see in Reginald:

What’s the point of this?

Reginald is a very useful project for the end user. If a user is interested in checking on his or her house from school or work, that person would be able to do so from an infinite amount of angles. The user can move around the house wirelessly and greet others. If you have children you can let them know you always have your eye on them!

More importantly, the biggest use featured in this Instructable is the implementation of the UDP technology. If someone can interface any physical and/or electrical object to an Arduino, that person could be able to control this object wirelessly in real time from anywhere. This is very useful. Reginald is an example application for UDP, a highly under utilized technology among projects.

What will this Instructable provide?

This Instructable will introduce Reginald as a whole and then go into a breakdown of every component in detail.

Performing all the necessary networking to accomplish this can be very complex and involved, however this method of communication is clarified and explored through this Instructable. I saturated approximately a solid month of research and troubleshooting into a simple guide; I provide troubleshooting guidance and example tests along the way.

This is a large project; so I believe it will provide the best clarity to break down this guide first with a large perspective and afterwards exploring each individual component of the project separately.

Prerequisite Knowledge that I will assume you already know:

This will save time of myself and others who are already very familiar with these topics. If I was to cater to the absolute beginner here, this Instructable would be easily, magnitudes larger. Someone who already understands the topics would have difficulty following the guide due to the size of it.

However, an absolute beginner can familiarize oneself with the given topics to research before attempting Reginald. If an individual understands these topics, that person will be able to understand the project.

Therefore, this Instructable caters to all. Given one is willing to learn.

In this tutorial, I will be showing schematics and diagrams of the custom PCB I built to saturate all the circuits; but showing how to build the board step by step would be a fairly large instructable in itself. If you understand the above, you won’t have a problem following the information that I provide.

The networking section is by far the most important, especially if you’re interested in communicating with your project via the Internet; and even more so if you happen to have AT&T as your ISP. You’ll see later.

Step 2: Macro view of the project

The Macro View of Reginald

The main picture is from a large point of view of how Reginald works.

Notice that there are two separate ways to connect to Reginald. This is because it is useful to have two different ways to make the connection dependent on the circumstances.

Don’t the Routers complicate the project and make it bulky?

I realize that using the routers on Reginald is a bulky at best; as an alternative, I could have used a wireless surveillance camera connected directly to the Primary Home Router and used a wifi sheild for the Arduino to also connect to the Primary Home Router. This would have cut out the “middle man” (Routers) of the project out and I could have made Reginald significantly smaller; in addition to this, utilizing the routers in my design is harder to implement.

Why did I use Routers?

The reason behind the routers is that one of my goals is simplicity in user experience. If the user wants to control Reginald, at home, from school, and decides to take Reginald to his/her friends house to show off: the user simply unplugs the camera, power and Arduino from the Wireless Bridge and plugs it into the Netgear Router. The user connects to the Netgear router and that’s it! If I were to implement a wireless network camera and wifi shield in my design, the user would perform the following to accomplish the same scenario:  bring Reginald to friend’s house; get all the networking information of the home network from friend; configure the camera to the network; access Reginald’s code; change web configuration and upload new sketch to board; then connect.

Be mindful when I refer to the Routers:

This project actually uses three Routers. The first one I will refer to as the “Netgear” router located on Reginald. I won’t talk about this very much, it’s only used for the direct connection to Reginald if you brought him outside the home network. A simple setup.

Later I’ll be talking about how the Wireless Bridge works.

Also notice that the camera does not interact with the Arduino at all. The camera is powered with the PCB board and connected to the Wireless Bridge or Netgear Router. The user can access the camera from anywhere at that point.

It is also important to recognize that the only thing the Battery is connected to is the PCB board. This is because the PCB distributes the power to everything else. Not all of the components require equal amounts of power. The Routers both require 12 volts; the Arduino and Peripherals all require 7 volts; and the Camera requires 5 volts. The PCB board needs to accommodate all these parts.

This list doesn’t include obvious items; these include but are not limited to: Heat Shrink Wrap, Ethernet Cables, Bolts and Nuts etc.[/box]