This project describes how you can build a mobile real time GPS tracker with integrated Google Maps. I began this project mainly to see if I can integrate all the different pieces of hardware and software to make a workable solution, and it took some time, but finally when everything was said and done, it looked pretty cool. I tore down everything and rebuilt it from scratch, making detailed notes and documenting the process.
When I started building this, I didn’t have any particular application in mind, but now that I have built it, I can see myself using it different applications, particularly if I can get to lower the cost. Even if you didn’t have any application in mind, it would be a fun weekend project, you never know, you might find the knowledge gathered during the process useful one day in some form or other.

In a nutshell, this is how the GPS Tracker works. The GPS chip outputs the positioning information which is transferred over a GPRS link to the mobile operator’s GGSN (Gateway GPRS Support Node) and then to  a remote server over a TCP connection. The TCP server stores the incoming positional data in a mySQL database. When a user clicks on the tracking page, Zope, which is an open source web application server, serves up an HTML page with an embedded javascript code. The javascript would run in the user’s browser and has instructions to retrieve the positional information from the mySQL database every second. It then integrates this information into Google Maps through Google Maps API which displays the position on a map. Since the positional information is retrieved every second and the maps updated at the same frequency, a real time GPS tracking effect is achieved. 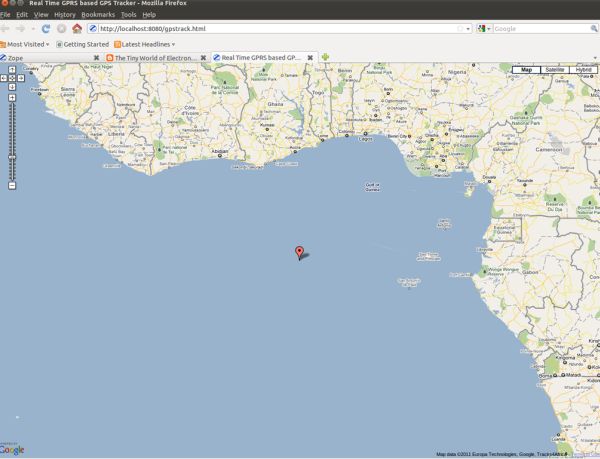 How much does it cost?

The costs are all associated with the hardware components. There is no software costs involved, since everything is open source.  The code is licensed under Creative Commons, so you’re free to use the code in this project in whatever applications you wish.
The total estimated cost is around $200. All the components can be purchased from Sparkfun.

All 3 libraries can be downloaded from http://arduiniana.org/libraries/. Follow the instructions to install them.
The following should be noted:
The line: cell.println(“AT+CGDCONT=1,\”IP\”,\”isp.cingular\””);establishes a PDP (Packet Data Protocol) context with AT&amp;T‘s APN (Access Point Name). If your cellular provider is not AT&amp;T, replace the string “isp.cingular” with the appropriate APN for your cellular provider. In the line: cell.println(“AT+SDATACONF=1,\”TCP\”,\”your_ip_address\”,32000″); Change this to the IP Address for your TCP Server.

The TCP Server is coded in python. It’s very simple in operation, basically opens up a TCP port and waits for the connection from the GPS Tracker’s GSM module. Once it receives, the connection, it accepts it and as and when the GPS packets comes, in it parses it out and stores the Latitude and Longitude in a MySQL table (which we’ll be creating in the next section). The TCP server will run on any python 2.x, download it from http://www.python.org/. It’s worth noting that Python 3 has major syntax changes, therefore the code will not run until you tweak it to make it compatible with Python 3. It uses a python library called MySQLdb, which you can download from MySQLdb from http://www.zope.org/Members/adustman/Products/MySQLdb . Follow the instructions to install it onto your python installation.
Type the following code into a file called tcpServer.py and you can run it by typing python tcpServer.py on the command prompt.  Replace ‘your_ip_address’ with the IP Address of the machine you’re running the TCP Server on. Note that if your machine in on the LAN and you have a router/firewall, you might have to port forward TCP port 32000 to the IP Address of the machine on which the TCP Server is running. Otherwise, packets coming in from outside your network will never reach the TCP Server machine. Don’t run the server code now, we still have lots of coding to do. Save the file and move on to the next section.
Also note that, you don’t have to use TCP. You can also use UDP or any other transport protocol. TCP packets have a 20 byte header whereas UDP has only 8 bytes. TCP also is a complex protocol and is an overkill for this application. I used it, but feel free to use UDP.

READ  Intro to GPS With Microcontrollers

A MySQL database is used to store the GPS Co-ordinates received. If you are using Ubuntu, as I did, you can use the apt-get utility to download and install the MySQL server as follows. I used Version 5.1 of MySQL server.
sudo apt-get install mysql-server-5.1
The Installer will ask for a root password. Enter your root password. This will be needed to log on to the MySQL database later as root.
You also need the development (header) files of the MySQL client. You can install it by entering:
sudo apt-get install libmysqlclient-dev
Now, we’ll setup the MySQL database. First log on using the username and password you set earlier. Enter
mysql -p -u user
Enter the root password when prompted.
It’s usually not a good idea to work on a MySQL database as root, so we’ll make another user, grant all privileges and than we’ll use that to make further changes. The mysql prompt is shown below as mysql&gt;. Replace user, host and password with your values. If the mySQL database is on the same machine, you can enter ‘localhost’ for ‘host’.

For example, [email protected]’localhost’.
msql>; GRANT ALL PRIVILEGES ON *.* TO [email protected]’host’ IDENTIFIED BY ‘password’;
Let’s now create a database. We’ll call it gmap.  Enter:
mysql>; CREATE DATABASE gmap;
Now, we can see if the database has been created, by entering:
mysql>; show databases;
You should see something like this:

The table shows the current databases in MySQL. The other entries might be different in your system, but as long as you have the gmap database, you’re doing fine so far.
Next change to the gmap database by entering:
mysql>; use gmap;
Let’s now create a table to hold our lat/long in the gmap database we created.
mysql>; CREATE TABLE gmaptracker (
->; id int(8) NOT NULL auto_increment,
->; lat double(13,10) NOT NULL default 0.0000000000,
->; lon double(13,10) NOT NULL default 0.0000000000,
->; PRIMARY KEY (id)
->; ) TYPE=InnoDB;
The table we created can be viewed by entering:
mysql>; show tables;
The output will show the table we just created.

READ  SEVEN-SEGMENT SINGLE-STEPS THROUGH THE TIME

Finally, since the table is now empty, when we issue:
mysql>; select * from gmaptracker;
it should show:
Empty set
Congratulations! You have a working MySQL database and a table in it ready to accept the GPS co-ordinates.

The Meter Dec 2, 2014 The whole idea of this project was to create a giant meter to show website...