This is my take on the clasic Pong clock with an RGB back light that changes every time the date is displayed. 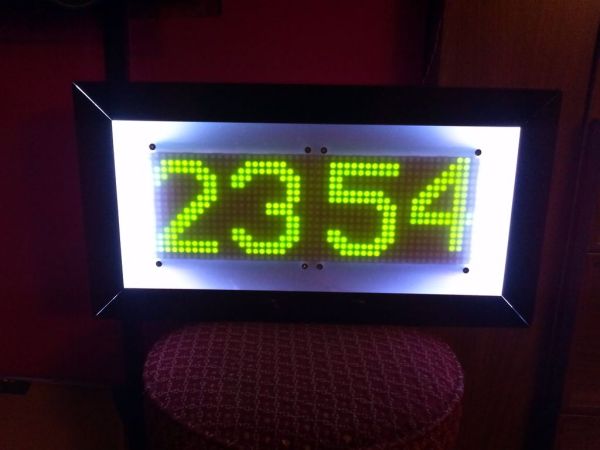 I did want the light to change randomly through the day but it made a mess of the coding for the clocks.
The latest version simply selects a random combination of Red, Blue and Green and will change the back lights when the date is displayed.

To get started you will need:

To get started you will need:

Oh, and since taking the pictures it also appears that I need black silicone for the corners!

There is a PDF in the ZIP file of the drawing that shows it all a little better.

I have had to move a few things round to free up some of the PWM outputs so if you already have a Pong Clock set up this won’t work without a few changes.

This also works with the 3mm LED displays if you fancy a Mini Rainbow Pong.

Basically assemble the controller as shown in the drawing, I used a standard UNO to slap the programe into the chip before mounting it in the holder, or you could add some risers to pins 1, 2, 3 and Gnd if you wish. then you would not have to remove the chip 🙂

I have also added an LED output to DO 8, this should flash at around once per second to indicate that the clock is running.
If you get errors like the time only shows 00:00 then it is probably because the voltage at your chip is less than 4.6V, you need to be as close to 5V as possible which is why I opted for the DC-DC module. I did have a 5V regulator on there but when it got hot the voltage dropped, even with its heat sink on. Probably because it ran fine with the 3mm matrix but the 5mm seem to need more power.

Step 2: Around the back

I used the fixing holes on the matrix as a template and drilled through the plexi, then countersunk the holes and popped 4mm machine screws through and held in place with a couple of nuts, I added three washer between the nuts so the matrix PCB does not bend.
Using the all purpose Hot Glue gun I stuck the plexi inside my frame.

Then using some foam backed double sided tape I stuck the ATmega to the back of the matrix, then stuck the DC-DC converter in place next to the ULN2003A.

On this one I chose to put the ULN2003A on the frame because this was a mod to the original board and I didn’t fancy doing the whole thing from scratch. All you need is the three connections to pins 5, 12 and 15 A grund wire and the 12V for the RGB strips.

Mega Pong next to Regular Pong

The one on the right is using the regular 3mm LED matrix, Mega pong is on th eleft before I added the frame.

It is inherantly difficult to photo anything that lights up, especially when you are using a mobile phone to do it!
I am toying with adding more RGB lights along the top and bottom, I have another Rainbow project on the go at the moment so I will see what bits I have left 😉

Oh, and I am adding a latching button to switch off the lights, it may be soothing trying to see what colour comes next but when you are watching TV it’s a different story!

Bode Plot on an Oscillscope

Maybe you’re learning about filters and want to see the how your filter responds in the 10Hz to 1MHz range....