We have been having some condensation and mould issues in our apartment recently due to, I think, the humidity levels. Our property is relatively newly built and, as such, has very good insulation properties (double glazed windows etc.). The side effect of this is that there is very little ventilation and therefore humidity rises over a period of time and water then condensates on windows causing puddles on the sills and mould in dark, cool corners. 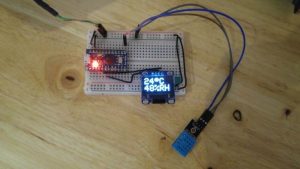 Our solution to this problem was to buy a dehumidifier (pictured), however I would still like to know what the relative humidity in the room is (the target is between 40%RH and 50%RH) and thus the need for a hygrometer. I could of course have bought one, but having an Arduino and OLED display to hand I thought I would make one (obviously!).

The design is dead simple. As I said, I had an Arduino and an OLED display to hand so all I needed was a humidity sensor which I picked up on eBay for ~£3. The full parts list is as follows:

The schematic shows how the various components were connected together and the picture show how they were arranged on a breadboard.

The code was created using the Arduino IDE and is attached. I created my own class for communicating with DHT11 sensor (which has it own particular protocol) and used the Adafruit and Wire libraries to communicate with the display which uses the I2C protocol.

Using HealthyPi with a PC for ECG, Respiration & SpO2

We initially made HealthyPi as HAT add-on board for Raspberry Pi. Now you can run the application on any desktop...