A polar plotter is a plotter with a rotating, extendable arm. Its characteristics differ greatly from those of a traditional plotter, which in most areas have a superior design. You could say the polar plotter is more portable or something, but mainly I made this one because it was more of a challenge. 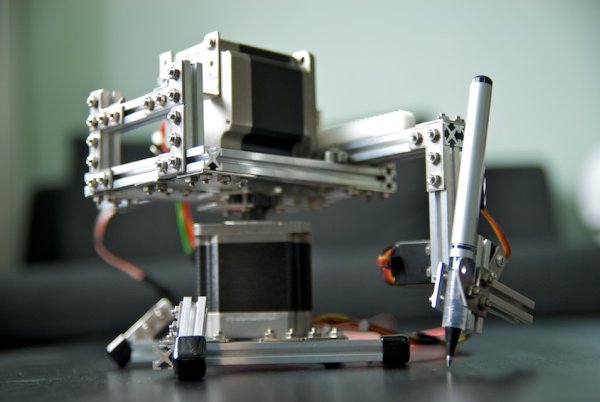 The code of this project is divided into two parts. One is the Arduino project that controls the plotter. The other is a java project used for generating font-data in a format readable by the Arduino program.

The Arduino project plotter_polar can be opened directly in the Arduino IDE.

The java project font-path-generator is a Maven project. To compile and run, do

The program produces output of font data that can be copy/pasted into the Arduino program. See the javadoc for FontPathGenerator for more info.

You can also import and run the project in Eclipse.

The brain of the plotter is an Arduino UNO Rev3.

The muscles come from two heavyweight stepper motors from All Electronics.

These are quite quite heavy and powerful and come with a firmly mounted gear head. That’s great when driving a gear rack

But not as great when you need to mount stuff to it. Here’s how I did:

The motors require quite a lot of power. This is provided by two Big Easy Drivers. 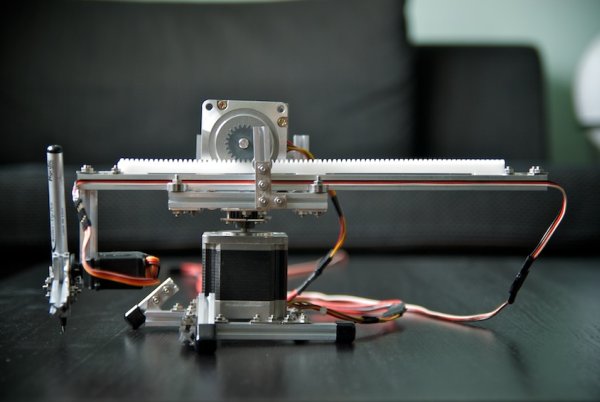 The normal Easy Driver does not do the job for these motors. I tried.

The backbone of the plotter uses the awesome Maker Beams.

For more detail: Polar Plotter on Arduino and MakerBeams