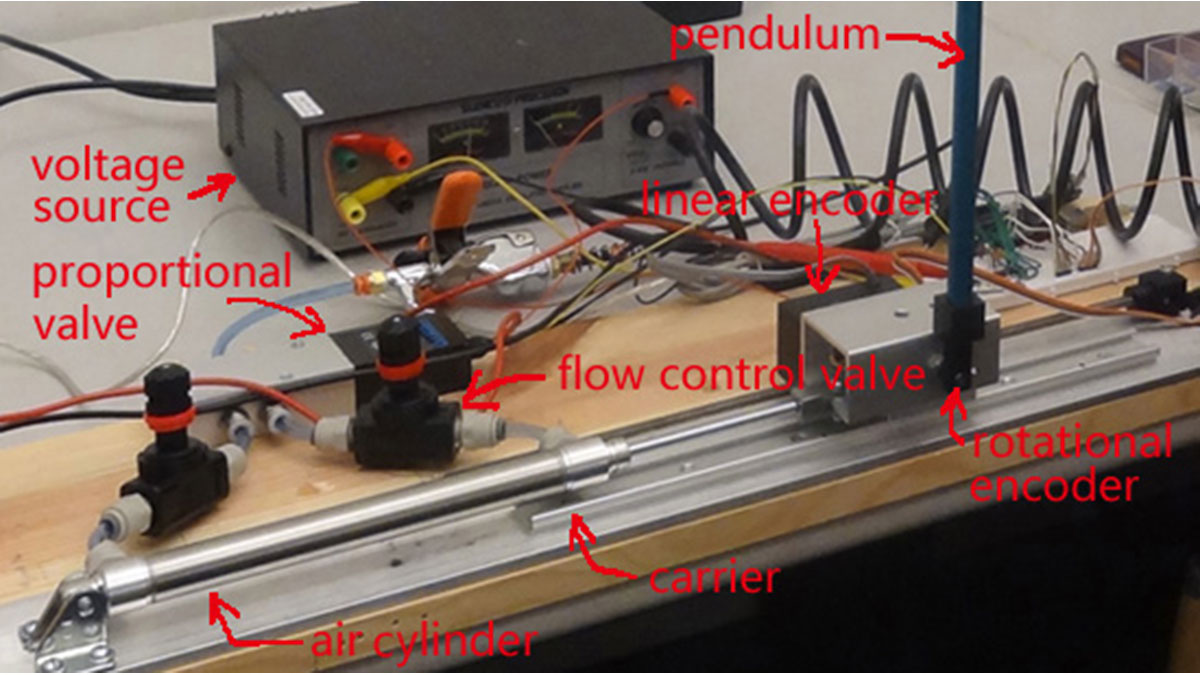 Compressed air comes from air compressor and goes in the proportional valve. Coming out from the proportional valve, there are two branches of air flow (one is compressor air, the other one is exhausted air) which connect to the air cylinder (pneumatic actuator). The pneumatic actuator connects to a cart (the aluminum box) where the pendulum is attached, and underneath the cart lies the carrier, which guides the cart along straight line. The rotational encoder is inside the cart, and its shaft is fastened throught the cart. The pendulum is attached to the shaft and is able to rotate 360 degrees. At the back side of the cart, a linear encoder is attached. For more detail please refer to VIDEO 1.

Arduino is used as the data acquisition board and control unit. Signals from the linear encoder and rotational encoder are acquired into the Arduino, and then an output voltage is calculated, which will then control the proportional valve through a Digital Analog Converter and Operational Amplifier. The circuit schematic diagram is shown below:

Note that the “black green red yellow” in linear encoder diagram are just merely the color of wires. You might have different ones, but after watching VIDEO 3, it should be clear on how to use a linear encoder–the connection and programming are similar to rotational encoder. The operational amplifier should be connected to the +12 and -12 power supplies (not depicted). As noted above, if using separate power supplies, they must share a common ground.

Alternatively, a moving average can be utilized, in which an array of the last x average values are stored, and the average of them is taken. This is more computationally heavy, but may filter out some of the noise.

How to read an encoder:

The DAC in used is DAC0808, and the operational amplifier in used is LM324. Basically what Digital Analog Converter (DAC) does is: given a digital signal from Arduino, DAC outputs an analog signal, which is used to control proportional valve. But because the DAC’s output is current and has very little power, we need an amplifier to drive the proportional valve. DAC0808 is an 8-bit DAC, and we give VREF = 12V. If we want a 6.6V output, here is how to calculate the digital value for it: