Pimp Your Chocolates with Arduino IDE and ATtiny13

The idea for this project came to me on the way to the trash. I was tasked with throwing away a box that has just been emptied of its original Ferrero Rocher sweetness content by my dear wife. This was shortly after the Valentine’s Day. So, I got to spend 10 seconds alone with this box and realized that it holds some promise, so it ended up on my workbench instead of the trash.

Despite its festive thematic appearance, this is a pretty sturdy box with enough space inside to hold  all components of a simple LED light chaser circuit and then some. Looking inside I found locations for 10 LEDs. Having actually completed this project, I now realize that there was space for at least 12 and the MCU chosen for the project – ATtiny13 – can just as well do 12, and no extra components are required. So, there you go: a path to improving my project right off the bat.

Needless to say, for the project to work, you will have to buy Ferrero Rocher chocolates again although this time a simple bulk packaging is just fine 🙂

I am a big fan of Arduino IDE and one of the important parts of this project was to make sure that I can program the smaller AVR chips, such as ATtiny13, using Arduino IDE. I’d like to refer you to a blog post about using Arduino IDE with smaller AVRs   and concentrate this instructable on actually constructing the device. Additionally, for some finer points on programming this particular light chaser, such as changing the light pattern or modifying the sketch to include additional LEDs, please see my Pimp Your Chocolates … blog post.

First step – getting parts together >> 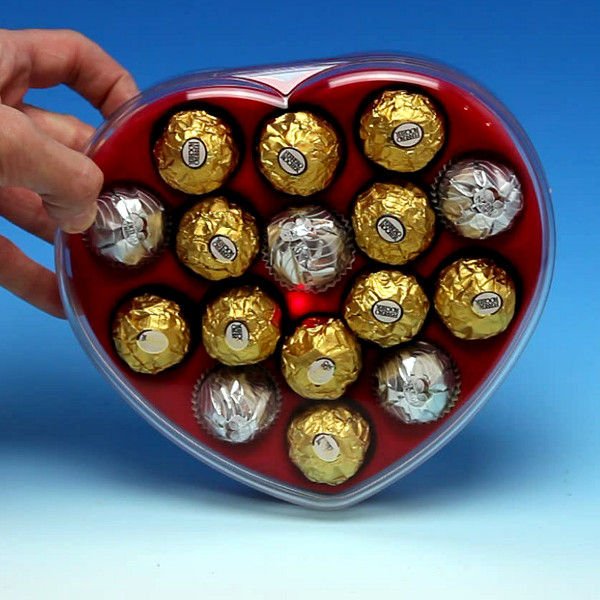 Step 1: Get parts and tools together

The project requires just a handful of parts. Note that one of the most important ones is not in the group picture: the ball tilt switch (the shake/move sensor). I extracted it from an old water filter pitcher that also didn’t quite make it all the way to the trash 🙂

Here are the parts:

You will need pretty much your regular tools for electronics projects  :

Although it is also a tool, the AVR programmer deserves a special mention. I used Atmel’s AVRISP MK II because I had it available. But you can stay true to the Arduino toolchain all the way and use an Arduino board as a programmer. Instructables has quite a few ‘ables about using an Arduino as an ICSP programmer, this one for example.  Note that most reference ATtiny45 or ATtiny85 MCUs but the pinout and everything you have to do on the programmer side is the same for ATtiny13, the differences are only in setting up the Arduino IDE.

Since there is not much space inside the box, this is a PCB-less project and so the best time to program the MCU is before you start the construction.

If you haven’t upgraded your Arduino IDE install to the current version 1.0, now is the best time to do it! Although it’s possible to program an MCU using a programmer with earlier versions, 1.0 makes it especially easy with convenient menu options. I definitely recommend upgrading before going further, if you haven’t yet done so.

The Arduino IDE comes with a set of C libraries that are optimized for  running on various hardware platforms and types of MCUs. By default, ATtiny13 libraries are missing. It’s a very small MCU and not many people program for it, I guess. Fortunately, there are at least two sets of Arduino libraries that either include support for or can be modified to support ATtiny13:

I ended up settling on Damellis’es libraries because my next project was to include an ATtiny2313 and smeezekitty’s are for ATtiny13 only.  I urge you to visit the homepage of the library you chose for a particular set of installation instructions or visit my blog post about them here: http://elabz.com/arduino-shrunk-how-to-use-attiny13-with-arduino-ide/ The installation is not a difficult process and basically involves simply placing the library files into the right directory under the Arduino IDE hierarchy and editing the boards.txt file to tell Arduino IDE that you have just added support for another hardware platform.

For more detail: Pimp Your Chocolates with Arduino IDE and ATtiny13

In this tutorial you will learn how to communicate with a computer using a MAX3323 single channel RS-232 driver/receiver and...