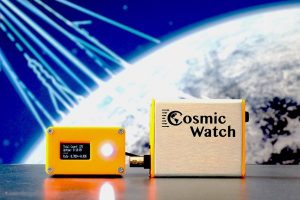 Muons last only fractions of a second, and during their fleeting lifespan they can be found through every layer of the Earth’s atmosphere, circulating in the air around us and raining onto the surface at a rate similar to a light drizzle. A small fraction of muons can even penetrate the Earth’s surface and travel several kilometers through rock and ice.

Now physicists working in MIT’s Laboratory for Nuclear Science have designed a pocket-sized cosmic ray muon detector to track these ghostly particles. The detector can be made with common electrical parts, and when turned on, it lights up and counts each time a muon passes through. The relatively simple device costs just $100 to build, making it the most affordable muon detector available today.

The researchers, led by Spencer Axani, a graduate student in MIT’s Department of Physics, have designed the detector with students in mind. They have started an outreach program called CosmicWatch, with a website that lists parts to purchase and detailed instructions on how to assemble, calibrate, and run the detector. The team estimates that an average high school student should spend about four hours building a detector for the first time, and just one hour building it a second time.

Once up and running, detectors can be carried around to measure muon rates in virtually any environment. The team has helped supply nearly 100 detectors to high school and college students, who have sent the instruments up in planes and weather balloons to measure muon rates at high altitudes. Students have also, as Axani has done, taken the detectors underground.

This project it’s a new time-lapse tripod or panning with two axis that works with an arduino protoboard. Everyone will...