Essentially another tutorial involving controlling DC motors. In this post I’m going to first alter a robot arm I had built previously from a beginners kit so that it can be controlled from Arduino. Then I’m going to write a series of posts on different ways to control the robot arm using Processing and other things. You should be able to use all of what I write for work with other toys and motors. 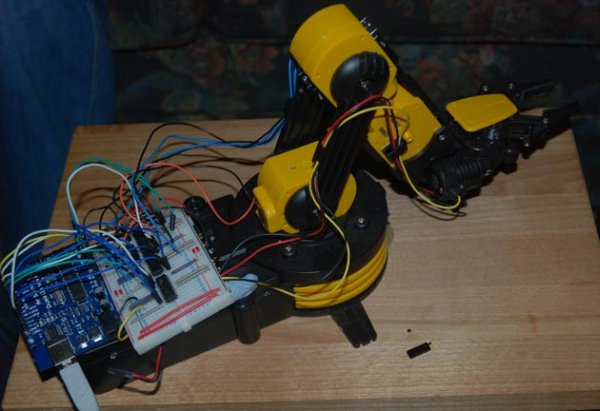 To start with have a look at the robot arm, it’s an ‘Edge Robotic Arm Kit‘:

The kit is a basic construction one and costs about £30 which you can find in most gadget shops and web stores. You assemble a gear box for each motor/ joint in the arm, doesn’t take long to build (about an hour) and is controlled by a set of switches on a control box. The only thing to note here is we’re dealing with motors, not servos or stepper motors just bog standard DC motors. This means calculating positions isn’t going to be straightforward later on. The kit has 5 motors and 4 ‘D’ series batteries to power them and can lift about 100 grammes.

So this version has a controller attached that lets you move each motor by pressing a switch, the electrics are pretty basic and don’t allow much control or further input. I have seen other versions that allow you to plug it in to a computer via USB but you pretty much have the same controls.

In order for us to build our own controls/ interfaces and software we need to modify the arm to allow us to interface our microcontroller – in this case an Arduino board. The best way I think do this, since we want to control a motor going backwards and forward, is to use H-bridge chips – the L293D and SN754410 and wire each motor into a chip and then alter the power circuit to run these chips. Arduino can then digitally control the H-bridge chip to turn the motor on/off and change its direction.

You can see some other work I’ve done with motor DC motor control and I’ll be covering the same info throughout these posts.

3 H-bridge chips – I heavily recommend using the sn754410 chip but you can probably get away with the L293 series. Each chip can control 2 motors – 5 motors = 3 chips.
Arduino Deumilanova w/ ATMEGA328
Breadboard/ Prototyping board
Jumper/ Connector wires
Wire cutters/ strippers

I hope you’re not too precious about wanting to use the control unit again, thats the first thing to go! I did look at working with this but it doesn’t give the level of control that I want. Also I’ll be cutting and stripping the wires and removing the control circuit from the arm. The only permanent damage is done to the wires – basically cutting the plugs off of the wires, so you could always get new plugs if you wanted to revert it, although once I’ve shown you what can be done I don’t think you’ll mind.

Step 1
First we need to create our breadboard layout so we can plug in all the wires, we’re going to be using alot of pins on the Arduino, in fact I think I use pretty much all of them. You could reduce this using shift registers but for now its not an issue, although please follow the wiring diagrams as this layout gives the least hassle. Some pins e.g. digital pin 13 will make the motors move when the board is powering up so we want to avoid this.

First of all we need to put our H-Bridge chips on the breadboard. Make sure to put them in the center like illustrated. This means the 2 sides of the chip are isolated – it will not work otherwise!

Bring your 3D models to life! In this instructable we will custom make a remotely controlled tank. We will infuse...