This is the cheapest and easiest way to make a two-dimensional laser show projector.

It uses just one pivoting mirror, powered by the focusing mechanism from a CD or other optical drive.

They said it couldn’t be done, but Ljudmila‘s skunkworks GRL research facility delivers anyway! 😉 This design was first discovered in 2006 and sucessfuly made by several beginners at the Laser Tags workshop in 2007.

I hope this Instructable, my first, will help to spread it around and let all of you make, test and improve it!

Here shown using an Arduino for control, but you could hook some other signal into it easily, from a music player, a soundcard or some other electronic circuit. 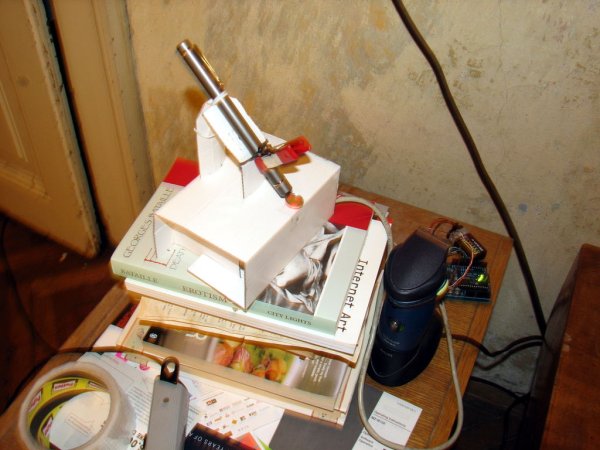 You’ll have to unscrew a looot of screws to disassemble the CD drive. If you have no better idea, just remove all screws you can find and try separating the components. In the later stages it might sometimes be necessary to apply brute force, but usually it’s possible to separate all of the surprisingly many parts of a drive without damaging them.

The picture shows what you’re hunting for. It’s the moving lens part of the optical head assembly.

It can look a bit different, depending on your drive. it has a static back and moving top part. Inside the moving part are two coils, one moves the lens up and down, the other one left and right. Permament magnets are fixed to the static back.

If you’re lucky, you will just be able to unscrew it. But sometimes you won’t be able to separate it from the bigger optical head with the lasers and pickups inside. That’s OK too.

See the wires in the last picture? That’s what you’ll add next!

Farnell and ADI to run webcast on digital isolators