As a part of being an artist in residence at Instructables, I took it upon myself to build of couple of noise machines / music boxes. My interest lies in designing objects that would enable people to explore the world of sound synthesis and for me to get a better understanding on how the different interfaces enables different interactions and sound qualities. 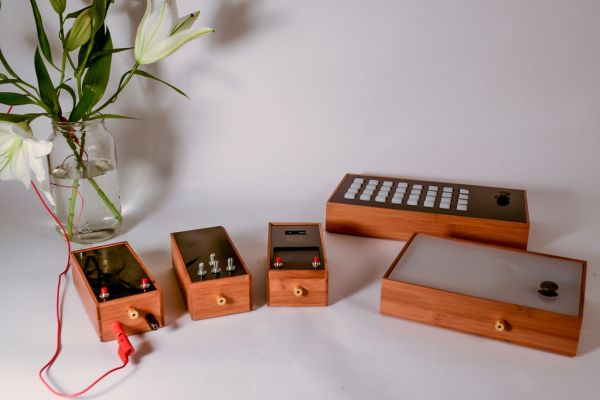 It has been an intense experience. Trying to build as many interfaces as possible within one month. I have tried to make all of them stand-out as finished, while still being hackable pieces. Everything I have done is published here on Instructables for others to experiment with.

All of the projects consists of a few basic components: An interface and sometimes a screen or a led matrix. The basis sound component is either a Gameduino or a synth based on the followinginstructable.

Most of these machines would have been simpler to make as software programs on a computer or even as multitouch applications on a smartphone, but I wanted to have an aesthetic criteria as a frame for my experiments: I wanted to create simple tangible interfaces that would inspire curiosity. The objects themselves should welcome the user to try out and explore their interfaces. Lastly I wanted each experiment to be self contained. Instead of them becoming interfaces for a laptop they should be the ones who created the music.

All of the projects are remixes of earlier experiments and inspirational sources found on the internet. Therefore each project should be considered my own interpretations and evolvements of other inspirational projects. I have done my best to credit my sources in each project.

The software for each experiment is still a little crude and leaves many possibilities open for new people to experiment with. I will update the software as I go along.

I made the following machines:

Step 1: Singing Plant: Make your plant sing with an arduino.

Making a plant sing has been a trick since the Theremin was invented.  Here I am going to teach you how to do this with and Arduino board, a gameduino shield and the touch shield from my previousinstructable. With the introduction of the touché frequency principle by Disney Research lab and we can now make a really stable solution that can run entirely on the Arduino platform. The Touché works on a similar principle as a normal Theremin, but does a frequency sweep instead. By hooking the touché up to the plant we can measure the capacitative interaction and convert it into sound.

You can find the Instructable here.

Step 2: Kaosduino: Make your own Kaossilator

Inspired by Korgs Kaossilator I took it upon myself to build an opensource version of it. This way people can design new ways of interacting with the touchpad. The basic principle is creating sound via a trackpad. This enables you to create an instrument with quite wobbly possibilities. The challenge is to program something that would enable you to create interesting sounds. This is also a challenge with the Kaossilator which get mixed reviews for the same reason. This is an initial prototype. It uses the an Arduino as basic 8 bit sound engine and uses a capacitative trackpad from adafruit industries as the input device.

You can find the Instructable here.

I recently bumped into NodeMCU firmware for the ESP8266. It’s an Lua interpreter, making tinkering with IoT ideas really simple....