Skip to content
OK, I will admit that I am a little obsessed with things Mayan at the moment, which explains why I wanted to make a Mayan Tzolkin calendar. I modeled the general layout and fabrication on the very nice Sleek Word Clock by scottbez1 which you can see here: http://www.instructables.com/id/Sleek-word-clock/?ALLSTEPS.

You can read about the Tzolkin Mayan calendar on Wikipedia http://en.wikipedia.org/wiki/Tzolk%27in. It is one of several calendars, and consists of 13 numbers and 20 day signs which appear in 260 combinations that rotate. In other words, with every change of the day the numer increases from 1 to 13 and then back to 1 again. Similarly the 20 day signs rotate.

What I needed was a frame and face with the numbers and day signs on it, which I modeled on the Sleek World Clock, and relied on scottbez1’s great instructions on printing the face and making the actual calendar. The electronics are Arduino and I put the code together from bits and pieces to take the date from an RTC, calculate the Julian Date and then work out where in the two Tzolkin rotation that day falls. LED’s are controlled via a shift register.

This is my first ever Arduino project – a testament to the great ease of use of this amazing technology! 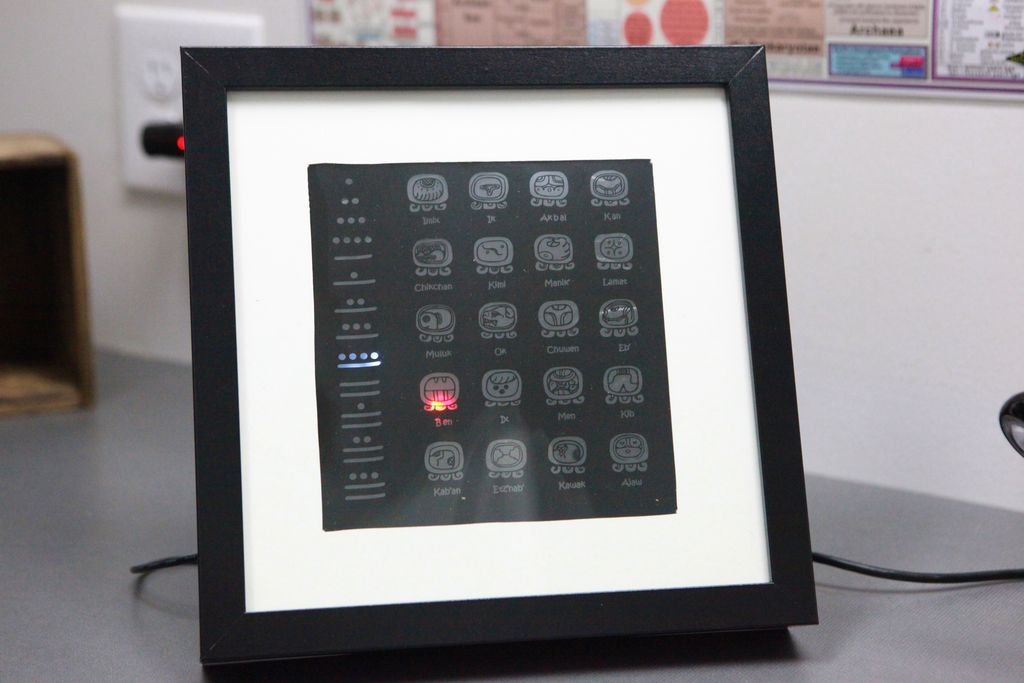 Step 1: Assembling the Electronics on the breadboard for testing

Step 2: Wiring it up

After testing everything on the breadboard, I drew a wiring diagram on an enlarged photocopy of the board on which I would assemble the shift registers. You can see how I am collecting connections along the side for the different pins on the Arduino Uno. Also, the order of the shift registers is indicated.

Then I put this part together, learning how to solder (not well, yet). The close up shows the different color coded wires. Brown and yellow wires going left are to the LED. Black is ground. Red is 5v. White and gray are latch and clock for the shift registers. Yellow exiting on the top and connecting shift registers on their right is data pin 2.

I made the LED board from black foam board, which was a mixed decision. The foam board is thick, holding the LED well, but not firmly, so that it was hard to control their angles. As a result, when everything is put together, some of the LED are at a slightly odd angle. Definitely an area for improvement.

Not shown, on the other side I made a series of walls around the LED to contain their light, made from cardboard and painted black.

This part closely followed the Sleek Word Clock by scottbez1 which you can see here: http://www.instructables.com/id/Sleek-word-clock/?ALLSTEPS.

I relied entirely on the instructions from scottbez1 here: http://www.instructables.com/id/Sleek-word-clock/step2/The-black-letter-mask/. I used my own mask made in Adobe Illustrator using purchased Tzolkin images from here: http://www.dreamstime.com/stock-images-maya-calendar-seals-tzolkin-vector-buttons-image14324534. You can see the pdf linked here. 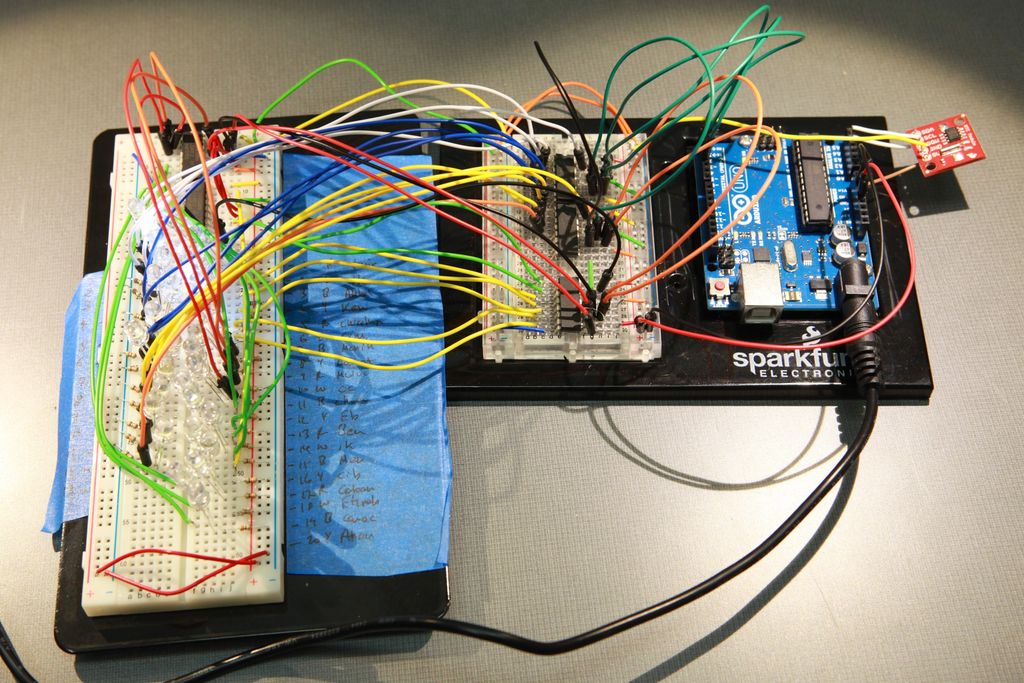 Finally, the code which uses an RTC chip to set the time on the board, then calculates the Julian date and from that works out where in the two Tzolkin rotations the day falls. It then writes the appropriate bit sequence to the shift registers. This is my first Arduino program, and I relied heavily on the referenced sources and the Arduino cookbook to put it together.