I came across a bunch of stepper motors and I have since been looking for a project to do with the kids.

An old Telecran (French for Etch-a-Sketch) later, we are in business !

The mechanical part has been done with some Fishertechniks parts.

I had to drill into the stepper cogs as the axis of the steppers were 5mm where the FT standard is 4 mm. 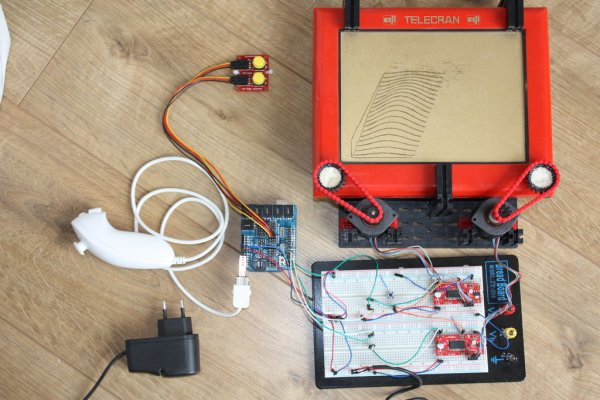 The other cogs were simply hot glued onto the Telecran (Etch-a-sketch) knobs.

The rest is best explained in pictures…

Some details of the motors and the final assembly.

To drive the steppers I used a couple of easy driver board from Sparkfun.

Very straight forward. Note the emergency button that allows to put the motors to sleep in case of a runaway sketch.

I added a sensor shield to the arduino for convenience as I have a couple of push buttons (with a pull-up resistor) already cabled.

WiiChuck adapter is one of my favorite. Although the Nunchuck is a little more difficult to program than it may first appear.

What I used for this project:
– an arduino Uno
– 2 stepper motors
– 2 easydrivers v44 (by www.sparkfun.com)
– various Fishertechnik parts (http://www.fischertechnik.com)
– a push button.