Skip to content
I’m going to show you how to make a 7 segment display with LEDS. Combine with Arduino to create countdown timers, simple text, and more. I like to make original projects. I searched the whole of instructables and didn’t find one like this. In fact, I searched google, and did not find any results. I thought of this when I couldn’t get my real 7-segment display to work! Enjoy!
It’s amazing what you can accomplish with LEDs!

How the project works:
All the anodes of one row are connected together. There are 3 LEDs in one row. See picture. When you supply voltage to the row, the whole row lights up.
So, connecting all the cathodes together, I used Arduino to program each row to turn on and off. In the picture above, here are the rows that Arduino is turning on: Row 1, 2, 4, 5, 6, 7,

Remember, the way instrucables is set up, the pictures come first, then the explanation.

If you are interested in making this project, please read over this whole instrucable BEFORE you start and get confused! And, please, don’t forget too look at ALL the pictures and the boxes for them.

Here is a video of my the display using numbers. The next is it displaying the word, ALPHA. 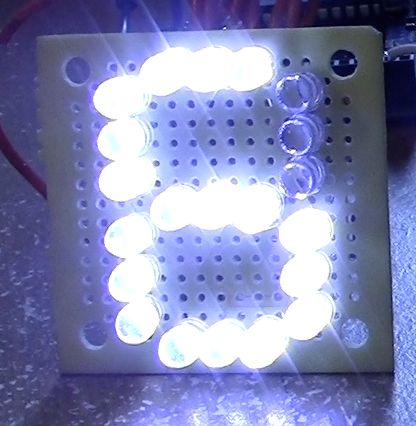 1. What did you make?
The idea started when I was getting frustrated because I couldn’t get my 7 segment display to work with one of my ICs, so I decided upon making my own, so that I’d could control it in basically any way I wanted, including simple text.
2. How did you make it?
The very first thing I did was get out my sketchbook and draw down my ideas, and how I would connect them together.
I started working on this project at 11:30 pm, and kept on going until about 4:30 A.M.. I kept on running into obstacles, such accidentally soldering the negative and positive leads of 3 LEDs together! I made it with 27 LEDs, a small piece of perf board, some basic tools, wires, and most importantly my newly-bought Arduino. I did this project by myself.
3. Where did you make it?
Well. . . I made this project all in my room, on my makeshift desk,and downstairs in our office (for programming Arduino). The more I programmed, the more problems arose, so I had to keep on running back and forth between my soldering un upstairs and the computer down stairs! I wore a path through my carpet, down the creaking wooden stairs, across the tile, over the wooden floor in my office to the computer. How did the project connect to other activities in my life? I was able to count this for my schoolwork! I aslo used this project as a show-off to Bravo, (another group in my activities, I’m ALPHA)
4. What did you learn?

If I could do anything differently i would have bought 27 resistors and soldered them to each LED!
What am I proudest of? My success! I would have never thought it woud be such an interest with my friends!

What you will need:

1x  Perf Board (http://www.radioshack.com/product/index.jsp?productId=2104052)
1x Smaller strip of perf (not necessary, but recommended)

Step 2: Getting Familiar With The Design

We need to insert 27 LEDs into the perf, but we need to do this in an ordinary fashion. Each segment will have 3 LEDs wired parallel with each other. All the grounds will be connected. See picture and schematic. 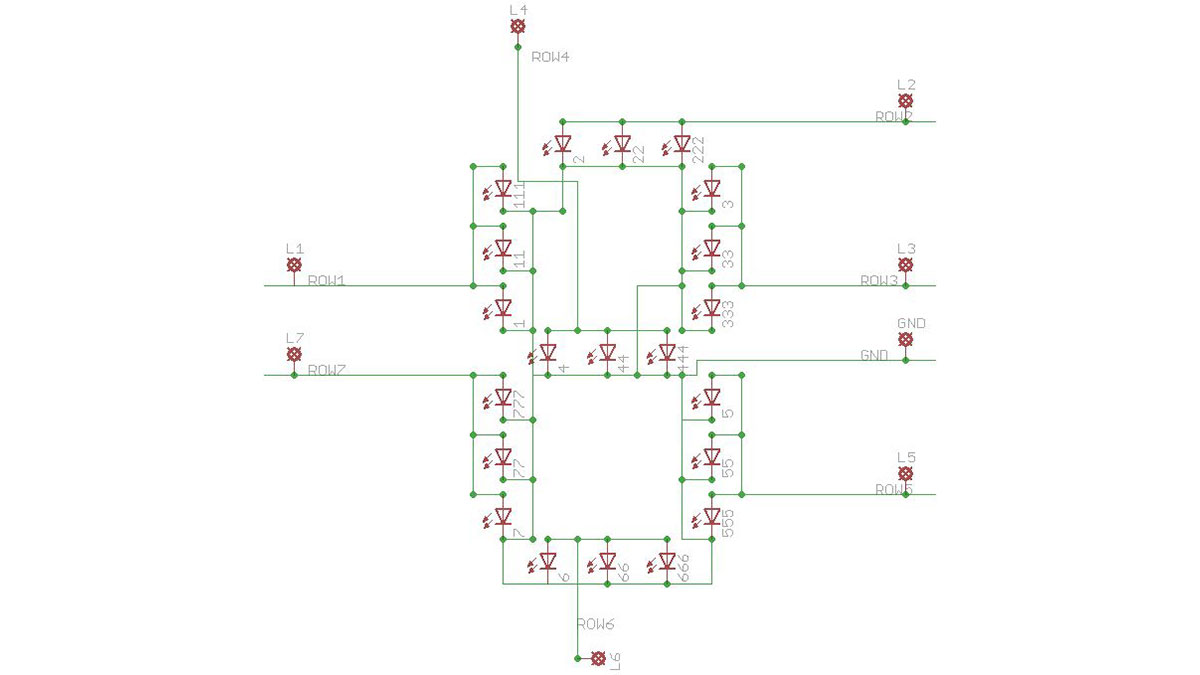 Step 3: Prepping the Perf Board

Now we will need a template of some sort to help us arrange the LEDs.  Get your perf and place the LEDS in the holes, like the picture. Then, taking them out, use a black marker to draw where the LEDs will go.  Now what I’m about to say is kinda hard to say with text, so bear with me. There is a specific reason why I put the LEDS in the manner that they are. You might be wondering, why didn’t I put the LEDs sideways. Well the reason being is that The LEDs have a little notch on the cathode side. Since the LEDs are a tight fight, this little flat end on the cathode enables the other LED to push up right next to it. If they were laid out sideways, there would be no flat groove, and the LEDs would not sit all together flat on the board since they are too close to each other. Try it out, and you will see what I’m talking about. I HOPE you understand!

I added some photos of how the LEDs fit. The first picture is of them vertically, and the second is of them sideways(horizontally).

For more detail: How to make a LED 7-segment display with or without Arduino
Categories: LED Projects
Tags: arduino, led